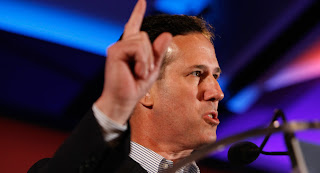 I’m no fan of Barrack Obama   but I really like this.

Last Friday, Rick Santorum  pimped his hopeless campaign at the University of Northern Iowa in a speech sponsored by NIU and Iowa Public Radio.  It was all pretty ho-um and predictable until the Q & A.  I’ll let Linh Ta, government reporter from the Northern Iowan in Santorum argues for government to return to past ways,  take it from there:.

Santorum explained that he lacked knowledge of the situation at the time and noted that the award has since been withdrawn.

In response to his explanation, the audience member asked, “So we shouldn’t trust Obama with our kids, but we can trust you?”

It was no news to me that Santorum had sponsored Jerry Sandusky glad-hand award from the Congressional Coalition for Adoption  (Even Bill Pierce found the award self-serving an referred to it the industrialist winners, in a private correspondence with me, as  “the hoity-toits”. who like to get their pictures taken with government big shots), I’m thrilled, nonethetless, that someone in Iowa–an adoptee perchance–had the presence of mind to call out Santorum on what to a lot of people, might consider a “minor” Santorum issue. After all he has so many. to choose from..

I know that other Angels in Adoption recipients have been caught with their pants down, too, or their hand in the til’ or  their hot sauce at the ready or whatever these people do, but I don’t have time tonight to research it..  If anyone has any stories, feel free to post them here. We have our own Demons in Adoption Awards,  but it’s also “fun” to expose these hypocrites whenever we can.


Thanks to Will Grigg for the tip.

6 Replies to “Santorum Called Out on Sandusky During Iowa Speech”