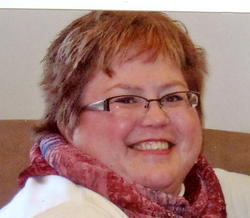 A few days ago we lost another good one.  Judy Ohles Kooistra, friend, blogger, and somebody who “got it.” passed away in Canton, Ohio after a hard fought battle with Inflammatory Breast Cancer. Diagnosed in December 2007, Judy went into remission in December 2008. In early November this year, she learned the cancer had returned.

On December 8  Judy went into hospice and died the same day.. Jenna Hatfield (Chronicles of Munchkinland) wrote this about her good friend and co-blogger  A Pause for Judy.

Judy has been a voice in the blogosphere for years. About adoption, about ethics, about books, about faith, about cancer, about life. I encourage you to pause today to read a bit of Judy, to say a prayer for both Judy and her family and to cover them all in your love today.

and after her death:  Thank You Judy

As with anyone who dies, there are things left unsaid. And so…

Followed by a wonderful tribute of thanks.

Judy is survived by her son Nate, husband Frank,  her mother, brother, sisters, and other family.

A remembrance of Judy’s life will be held at the John Knox Presbyterian Church in North Canton on December 17.  Contributions in her memory can be made to the Little Pink Houses of Hope or to John Knox Church.

You can get to know Judy better at her blog, Just Enjoy Him  She was also a contributor to Mothers with Cancer.

I didn’t know Judy well.  She was from my hometown and we corresponded sporadically about adoption mostly, and a little bit about Canton. I met her briefly at the ASAK conference at Pitt in 2007. She was a wonderful sane voice in a place where sanity is a stranger.


Today Judy’s obituary appeared in the Canton Repository and I’m posting it in full here.

. She was born in Cortland, New York and was raised in Kent, Ohio. She graduated from Kent Roosevelt High School, Kalamazoo College and Kent State University where she earned her MLS Degree. Judy was a Collection Development Librarian and Associate Professor for Libraries and Media Services at Kent State University, Stark Campus. She was a member of John Knox Presbyterian Church where she served as a Stephen Minister. Judy was a blogger and enjoyed writing. She was supportive for many with breast cancer, research and funding. She was very passionate about international adoption and adopted her son, Nate, from Ha Tinh, Vietnam in 2002.


She is survived by her husband of 15 years, Frank; and son Nate; mother Shirley Ohles of Sandusky; brother Fred (Rosemary) Ohles of Lincoln, Neb.; sisters Janet Ohles of Carmel, N.Y., Margaret (Bob) Black of Port Clinton, Ohio; brother-in-law John Kooistra of Fairbanks, Ark; sister-in-law Karen Callahan of Akron; and nieces and nephews. She was preceded in death by her father John F. Ohles.


A Celebration of Life will be held Saturday Dec. 17 at 11 a.m. at John Knox Presbyterian Church, 5155 Eastlake St., NW, North Canton, OH 44720, with Rev. Tom Houston officiating. Then, the family would like you to join them following the service in the church fellowship hall for a time of sharing luncheon. Memorial contributions may be made to Little Pink Houses of Hope or to John Knox Presbyterian Church. Arnold 330-456-7291 www.arnoldfuneralhome.com\

Published in The Repository on December 11, 2011