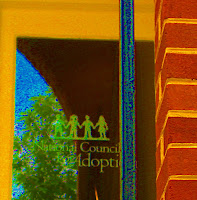 Today I’m trekking once more into the Heart of Darkness to attend the annual National Council for Adoption conference, this year appropriately titled Surviving and Thriving in Volatile Times.

Topics include lots of industry survival stuff: private-public collaboration, mergers, ethics (or lack thereof), international updates, and my favorite: Validating Your Agency’s Purpose: What Research Really Tells Us About the Impact of Adoption on Birthparents, Children and Families. (Care to bet a week’s wages–if you’re fortunate enough to have a job–there’s no mention of records snatching and identity theft?) I’m especially looking forward to the return of The Story Lady–Dr. Karyn Purvis–who equates wheeling your kid around the store in a grocery cart with child abandonment. (Do you really want to know?) Purvis will keynote lunch on Thursday followed by a break-out with an “infant massage representative.” Guess what I won’t be sitting through. I’m undecided about the unPierceian 6:30 am pilates.

On the upside, I won’t have to listen to a lecture on Primal Wound Theory or pass a Kleenex box around the room.

16 Replies to “RETURNING TO THE HEART OF DARKNESS: NCFA CONFERENCE”