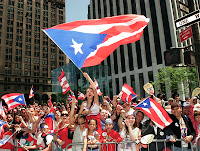 Listen to this. As of July 1, 2010, all of Puerto Rico’s previously issued birth certificates will be invalidated. This means that over 4.1 million Puerto Rico-born US citizens–over 1 million living off the island, mostly in the United States–will be forced to get new bcs or be treated like security risks with no legal existence. Kinda like adoptees.

According to an article published by the Associated Press, Shock over voided Puerto Rican birth certificates, the new bcs are needed to combat identity fraud due to a lucrative trade in birth certificates and other ID documents stolen from schools and other institutions. The papers are then sold and used to get illegals into the US and to establish US citizenship. (Until this year Puerto Ricans on average were forced to get about 20 bcs in their lifetime, since everything from schools to sports teams required certified bcs kept on file.) Kenneth McClintock Hernandez, from the US State Department says that up to 40% of identity fraud in the US is generated out of Puerto Rico. The stolen bcs go for $5,000 – $10,000 each on the black market. (Note to Bastardette….oh, never mind!)

The article indicates that the new law isn’t setting well with Puerto Ricans, especially those on the mainland, since neither the Puerto Rican nor US governments have felt much need to tell anybody about their documentary disenfranchisement. State threw a press conference in Puerto Rico last December, but it didn’t draw much media attention…so screw ’em. So far, word has gotten around mostly by word of mouth and through obscure publications. Of course, nobody bothered to figure out how this mandate will affect little things like passports applied for with “invalid” birth certificates.

The new bcs should be a cash cow for the Departmento de Salud (PR Health Department), which will charge $5.00 for the new document. This is the same fee currently in effect, but applicants will also have to show sufficient proof they are who they say they are, which according to the department webpage, includes (at the moment) driver licences, passports, state IDs, work IDs, state aid cards…all of which were obtained with…the bastard breeder birth certificate. The government has kindly offered to waive the fee for anyone over 60.

I probably shouldn’t even be writing about this. Some bright bulb state functionary might read it and decide it would be a dandy way to prop up the sinking budget…er I mean… to protect the public from identity thieves and terrorists in their own state. Just like it currently protects the public from its adopted class. I bet if New York or Indiana or Wyoming tried to pull this crap there would be hell to hear. And let’s not forget the politica, economic, and paper nightmare of Real ID and it’s permutations.

And don’t think that’s too far out there. I am currently reading Reproducing Empire: Race, Sex, Science, and US Imperialism in Puerto Rico by Laura Briggs (whom, btw, I met at the ASAC conference at the Univrsity of Tampa in 2005) about how Puerto Rico has been the testing ground and gateway for US domestic policy and moral busybodyness, much of it not very nice.

One Reply to “PUERTO RICANS: WE ARE ALL ADOPTEES NOW!”