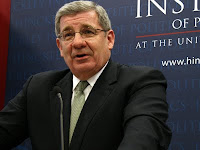 I’ve been meaning to post this addition to the Very Important Person Hall of Fame.

On January 29, ABC 4 in Salt Lake City reported a baby lift story that involves Very Important Persons in Utah and beyond. The Very Important Person Magnet is Stephen Studdert, (a VIP in his own right) an adviser to Gerald Ford, Ronald Reagan, and George H.W. Bush. You can read his bio on his Studdert Group webite.

According to the ABC 4 report Studdert started the Utah Hospital Task Force and negotiated the “release” of 125 “orphans (the figure was later corrected) bound mostly for Salt Lake City and presumably nice Mormon homes.

As a former mission president for the Church of Jesus Christ of Latter-day Saints, Studdert started the task force with a call to all former L.D.S. missionaries who served in Haiti to return in the aftermath of the earthquake to serve again, this time as volunteer interpreters. The task force was expanded to also include medical teams, construction workers and security personnel.

The Task Force doesn’t have a webpage, but it does have a blog and a Facebook page. It is working with Healing Hands for Haiti International Foundation, 501(3)(c), which seems to be an L-d-S organization, founded in Salt Lake in 1998. Its mission is fostering the expansion and quality of rehabilitation services for the benefit of physically disabled adults and children in Haiti. The Healing Hands facility in Port au Prince was severely damaged in the earthquake. Dr. Jeff Randle, founder and Chair of the Healing Hands Governance Committee has just returned from a week in Haiti. His blog is here.

According to ABC 4, the “orphan” evacuation had been “up in the air” for a week. On the 28th it was called off again when the adoption agency handling the children said that the Prime Minister of Haiti (why is it that US reporters can’t actually write his name?) Jean-Max Bellerive, had left the country without signing the releases. The Deseret News pouted, “The Haitian prime minister had run off to Canada.” The same article parenthetically informed us: “he was reportedly in Canada.” (NOTE: Google is your friend).

Bellerive, in fact, was in Montreal attending a conference with US Secreatry of State Hillary Clinton, Canadian Prime Minister Steven Harper and others to “review and improve the delivery of short-term aid as well as chart a course for long-term recovery”–hardly as important, of course, as expeditiously sending off a few dozen adoptables to be Mormonized and Caucasianized. The Miami Herald reported that after the Montreal trip Bellerive went to the Domincan Republic, presumably on business, not to live it up at someplace like Villa Castellamonte to spite USA paps.

On Thursday evening, around the time Studdert’s “rescue plane” landed, agency reps said they were informed Bellerive was returning to Port au Prince, but would not be available until some time Friday to finalize the authorizations. The “rescue plane” might be forced to return without its human cargo.

Then, like Jones, along came Studder. ABC 4 reports: (my emphasis):

ABC 4 News has learned Stephen Studdert, the task force leader, went immediately into negotiations with both U.S. and Haitian officials on the fate of orphans from the Foyer de Sion Orphanage — 70 of whom already have adoptive parents waiting for them in the United States.

These negotiations continued through the early morning hours of Friday while the task force’s charter jet remained on the runway at the Port au Prince airport in violation of rules requiring relief aircraft to depart within 90 minutes of arrival.

Aid planes were delayed or diverted, so Steve Studdert could bring home the bacon to Utah.

On January 29, at 8:48 AM the Healing Hands blog posted a text message that the organization had negotiated the release of 125 “orphans” who were headed to Miami.

We have negotiated the release of 125 orphans bound for SLC and are on ramp in Haiti. Steve Studdert and Executive team along with full support from US Military and US Customs and ICE Agents made it happen. It is truly a miracle. 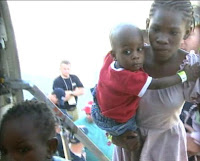 According to ABC 4, 70 of the “orphans” were going to adoptive parents waiting for them in the US. As usual, reporting was fuzzy and incurious with universal claims that the children had been adopted pre-earthquake, though it is more likely they were in the pipeline. Maybe.

The adoptions went through For Every Child. Here is its Haiti Adoption page. Agency rep Lori Timmerman told ABC 4 that the agency was scurrying to arrange for host families though social service agencies if “extra children do in fact make the trip to Utah.”

But wait! There’s more! Watch this video from the SLC Fox affiliate where we learn that the “release” was pushed through by Utah Senators Orrin Hatch (right), Bob Bennett, two other unnamed US Senators, the US Ambassador, and two unnamed former White House officials. Here is Hatch’s press release. In an entry dated Jaunary 29, 8:15 PM, the task force blog acknowleges assistance from Hatch and Bennett.

And we can’t forget God who created this massive orphan migration for his greater glory and to make the American middle class feel good about itself. Lori Rosenlof, a pap in waiting of two and Port au Prince orphan herder told the Deseret News, “God has had his hands all over this.”

The number of children supposedly sent to the US varies greatly. Initially, the Utah Task Force said 150 would be taken out. The number has varied due to paperwork problems, final release authorizations, last minute changes, misstatements, and misreporting. 150 was downgraded to 141, 125, 70, and finally 66, a figure the task force says is correct. Other children reportedly will be airlifted by other aid agencies when the US government approves entry.

Jason Glen Taylor, a volunteer with the Utah Hospital Task Force hit the public’s panic button when he begged, during the Fox video, “These babies will not survive here. There’s babies dying in the streets. Let us take these babies home.”

But those babies are not dying in the streets–not those with a troop of task force nannies taking care of them. Instead babies are dying in streets, hospitals, and camps due to lack of medical supplies and other aid while privileged politicians, their cronies, and “desperate” US paps hog air space and tarmacs, twist arms and play Great White Hope.