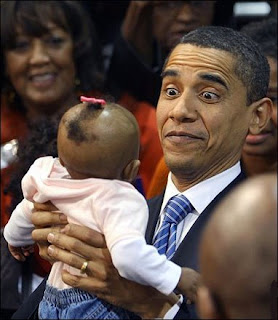 Though, I’ve been writing about John McCain’s adoption problem, (see previous entry) I did not intend to leave Barack Obama off the hook.

Obama, too, warmed to Rick Warren’s suggestion of a PEPFAR plan to “rescue” by adoption 148 million so-called orphans ’round the world. His comments below, in conjunction with his earlier stated belief in Jesus as his redeemer,is code for his willingness to open up adoption (more than it already is!) to a globalist evangelical-government partnership.

From the CNN transcript:

WARREN: OK. This one is dear to my heart. Most people don’t know that there are 148 million orphans in the world. 148 million kids growing up without mommies and dads. They don’t need to be in an orphanage. They need to be in families. But a lot of families can’t afford to take these kids in. Would you be willing to consider and even commit to doing some kind of emergency plan for orphans, like President Bush did with AIDS, almost a president’s emergency plan for orphans, to deal with this issue?

OBAMA: I cheated a little bit. I actually looked at this idea ahead of time, and I think it is a great idea. I think it’s something that we should sit down and figure out, working between non-governmental organizations, you know, national institutions, the U.S. government and try to figure out what can we do. I think that part of our plan, though, has to be, how do we prevent more orphans in the first place, and that means that we’re helping to build a public health infrastructure around the world, that we are, you know, building on the great work that you, and by the way, this president has done when it comes to AIDS funding around the world. I think it helps. I’m often a critic of President Bush, but I think the PETFAR [sic] program has saved lives and has done very good work and he deserves enormous credit for that.

Obama has no personal adoption baggage or scandal–that we know of–but like McCain, he has no problem pandering to the christo-socialist adoption agenda and its money-grubbing child redistribution agencies. The US government has no business funding mis-named “faith based” programs of any type, and certainly not those that seek movement and church growth through adopta-evangelization.

Adoption “reformers” need to put both these jokers on notice.

12 Replies to “NOT LETTING OBAMA OFF THE HOOK”