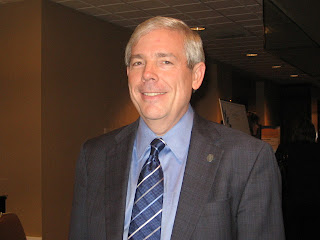 Recently I attended the annual National Council for Adoption conference in Washington–my third in four years. On Saturday (Sept 27) I caught NCFA president Tom Atwood, between the last panel and lunch. I was able to do a short interview with him about the Nebraska Fiasco–Nebraska’s teen dump epidemic. Atwood was unaware of Gary Staton’s “legal abandonment” of his 9 kids at Creighton Medical Center ER, which took place during the conference, until I told him. We only had a couple minutes to talk and were cut short by lunch call. Obviously there is much more to discuss.

There is time yet to bring NCFA to the Dark Side!

The most interesting part to me is that Atwood’s criticism of the Nebraska law and its consequences are very similar to my and Bastard Nation’s arguments against baby dumping all together–only he excludes newborns from the equation where we oppose it for all, no mater what the age.

With Atwood’s consent, I tapped my interview with him. The transcription is below. I have edited nothing except an interruption.

BASTARDETTE: I’m here at NCFA [conference] talking to Tom Atwood about the Nebraska Fiasco. For a little background: Wednesday, a father safe havened 9 of his children at the Creighton University Medical Center Emergency Room under the safe haven law. So far there have been 14 children, almost all of them over the age of 10, who have been safe havened in the same method. So, Tom, would you like to make a statement on that?

TOM: Well, first of all, this Nebraska law, when you come right down to it, is very different from other safe haven laws. What safe haven laws do is that they create a certain time period during which these desperate panicked birthmothers can relinquish their child safely and anonymously. In those rare emergency cases where the woman has been keeping her pregnancy a secret and she doesn’t know what to do with the child and is in danger of harming the child. Nebraska is the only state that has not put a time limit during which this can happen. It has essentially created a …(interruption)…

This has created a new means for relinquishing—voluntarily relinquishing– a child to a public system. It is… it’s not necessary… it’s not…it essentially not a safe haven law and hospitals—it’s hospitals right?

BASTARDETTE: Right. One was a police station which wasn’t legal.

TOM: Hospitals are not part of the child protective system. The usual way that the child gets into public care is through the child protective system, and it can be done voluntarily. More often it is done involuntarily. But this creates…it makes no…Parents who are struggling with parenting a child should not have the option of simply… no wait a second…again safe haven laws are for that short period immediately following birth when a woman is most susceptible to harming her child. It should not be used as a means for a… convenient means…it should not be used for a convenient means for people who are having difficulty parenting their older children to drop them off, to get them out of the house. That’s not what safe haven laws are about. Essentially, this is not a safe haven law. It doesn’t have any kind of restrictions.

BASTARDETTE: You’re basically using the same argument we use except you’re still applying it to newborns. You know we saw this moving up. You know Bill used too talk about scooting up the age and…

TOM: He liked that idea?