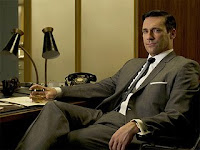 Bastardette is so distressed about the end, holy moley as it is, of S3 of Mad Men that we simply can’t write tonight. Luckily, we recently purchased S1 on DVD to osmose. Then on to S2.

We’ve been knocking around for weeks looking for a discussion about Don Draper’s adoption issues. So far nothing specific. BTW, Basket of Kisses (love the name) is the best site for all things Mad Men, and we should only hope for such intelligent discussion about adoption! Of course, in some ways, Mad Men is ALL about Don’s adoption/identity issues and the whole American ethic of image creation and re-creation (unless it’s Caldecott Farm). But a Bastard Eye analysis just isn’t out there, except from Don himself, when he drifts momentarily back, to Dick Whitman.

I miss Don already and am too engrossed in mourning and withdrawal to discuss such esoterica tonight. However… 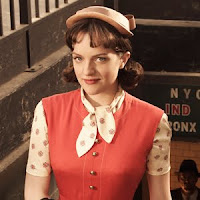 When I was in college my mother insisted I go into advertising. She thought I’d make a bang-up copywriter for reasons never made clear to me. Though I was attracted to the idea of living inside a Rona Barrett novel, I didn’t do it. I should have. I’d have a lot more money and I’d not be spending my time in front of a computer screen writing about adoption. Whatever, I don’t think I could have gone though the ’60s wearing print pussy bow blouses –and yes, that’s what they’re really called–and diddling Pete and Duck. Now Don Draper….

Addenda: The season’s finale crashed the Lipp Sisters’ Basket of Kisses server. it’s been a couple hour and it’s not back yet.