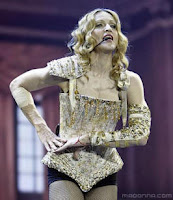 The New York Times today reports that the British children’s charity. Save the Children UK, has asked Madonna to reconsider her adoption of Mercy James (see entry below).

Of course, Save the Children would never want anyone, aka Madonna, to think that it thinks the singer is up to no good:

‘Please think twice,” Save the Children spokesman Dominic Nutt said, explaining that many of the international adoptions that occur around the world are unnecessary.

Nutt said he was not suggesting that Madonna was doing anything wrong — but he said the whole process of international adoptions is often flawed.

”I would not want to, for one second, suggest that Madonna hasn’t done anything by the book,” Nutt said. ”But sometimes the book can fail.”

Madge’s spokesperson, Liz Rosenberg, says Madonna will not comment on Save the Children’s suggestion.

2 Replies to “MADONNA UPDATE: HAVE MERCY ON MERCY!”