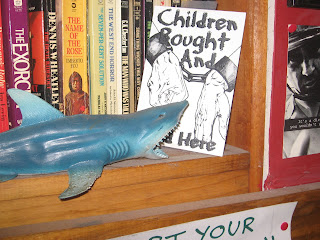 When we last left the Morriseys (except for their comments re: Wendelboe and Woods), they were demanding that the American Adoption Congress let them speak at MY conference presentation. While I’ve seen some bad behavior from them before, this, I thought, was serious shark jumping, though hardly equal to their 2003 report to the Lexington, MA police claiming I had threatened to kill Jean on alt.adoption, of all places.

I’m not a member of the AAC. Even if I were, I’d not be privy to its decisions regarding policy, speakers, or anything else. I, therefore, haven’t seen the letter, but I understand that AAC wrote to the Morriseys explaining politely why they could not horn in on my presentation or attend the conference: little things like conference proposals and deadlines. That would have been enough to restrain the less obsessed. and more polite. After all, the Morriseys aren’t queer and the Wakefield Sheraton Colonial Hotel and Golf Resort is not St Patrick’s Cathedral.

In-the-know people, however, warned me that the Ms might just show up at Wakefield anyway. I said, you’ve got to be kidding. They weren’t.

Right on schedule, the Morriseys arrived Thursday morning at the hotel to set the record straight–to undisinform the AAC masses of the fraud I planned to perpetuate on them about baby dumps–despite the fact that the AAC got on board with BN and me years before the Ms had imagined their first dead baby.

I spent Thursday morning attending DMC’s keynote and working in the bookroom. I had no idea of what was transpiring upstairs. Late in the morning, though, I heard that the Ms and two others had tried to enter the facility. Of course, the AAC had taken the precaution to warn the hotel and its own security of a possible invasion. As far as I know, nobody had taken the time to look up their pictures, so I guess the Ms just looked suspicious.

Since I wasn’t there, I can’t report first hand, and can only repeat what security told me. Too bad! If I’d been there we could all be watching the fun on YouTube right now instead of reading this. I’m sure the National Safe Haven Alliance would love to see its treasurer getting the boot from a hotel plainclothes cop for trespassing and conference crashing. According to hotel security, Mr. M told them that he had come there to “protest” me. After my presentation was finished, I was told, in fact, that the Ms and their friends attempted to crash the hotel five times to disrupt my presentation. FIVE times. And they call me radical!

I have no idea what kind of “disinformation” I was supposed to be disseminating. Legislative history, separation of powers, state action, juvenile court rules, putative father registeries, fathers rights organizations, court rulings, stories of jerked-around dads–everything documented and footnoted. That must be pretty scary to the 99% of the American public who, according to the Morriseys, thinks baby dumping is the cat’s pajamas.

Ironically, two years ago I attended the annual NCFA conference–and yes, paid for it– and had quite a good time. Despite political differences I get long with the NCFA crew. I treat them with courtesy and respect and they treat me the same. I would not dream of demanding Tom Atwood give me speaking space or of sneaking into their event not once but five times. How ill-behaved is that?

Pre-Morrisey safe haven discourse was quite different from what we have today. Ron Morgan attended the CWLA conference in New York, and Ron and I attended the conference-that-never-was in Memphis. Everybody got along fine at both. When Dr. Pierce, John Tyson, Geanie Morrison, and some others walked out (with much justification) some of us stayed and held an informal conference in the lounge. Ron and I, people from AAC and CWLA, Tim Jaccard, Dawn Geras, a few policy wonks, and a handful of locals, had a nice friendly afternoon chat-up. (The babyklappe folks from Germany, disgusted with everything, went down to Beale Street to get drunk). We shared concerns. We passed around business cards. Nobody name-called. Nobody smeared their opposition. Nobody assassinated somebody else’s character.

That could never happen today. The Morriseys have poisoned all civil discourse on baby dumps. They bring nothing to the table but a hatchet and threats. They fabricate, insult, and demean. They are sore winners. They know nothing about adoption, child welfare, or law and are proud of it.

Bastards like to have fun. The Morriseys evidently don’t. They could have done a little street theatre, a little Baby Safe Haven Rap. They could have just waved a dumb sign. Instead they disregarded boundaries, private property…and dare I say, good manners.

I half expected to see a write-up in the Globe or Herald the next day about how the saints were persecuted by the American Adoption Congress. That would have meant though that the reporter would have had to contact the AAC for their side…and did the Morriseys really want to look that stupid: protesting an adoption reform conference?

38 Replies to “JUMPING THE SHARK IN WAKEFIELD: IT’S ALL ABOUT THE MORRISEYS”