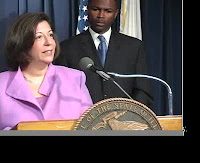 Not that we’re surprised, but…

WGIL-AM, Galesburg, Illinois has confirmed that the New Illinois Adoption Law.com, orphan webpage is being paid for by Rep. Sara Feigenholtz, sponsor of HB 5428, the bill that gutted the right of adult adopted folks there to obtain their own original birth certificates without jumping through more hoops than a hula hoop factory. On fire.
We reported earlier (directly below this entry) that Feigenholz’s “assistant” Melisha Mitchell, owner of the search company White Oak Foundation and alleged author of the bill was listed by Whois as the domain owner.
From WGAL:
Website helps adopted adults with birth certificates: State Representative Sara Feigenholtz, sponsor of the bill, says she’s paying for the website herself, because she didn’t want the state budget mess to delay it from going up.
There is certainly nothing illegal or unethical about them putting the information online. In fact, it’s sorta nice to have a one-stop place, written in their own words, to show how many ways the two have have screwed Illinois’ adopted class.
What is problematic, though, is how the duo’s names are conspiculously absent from press releases and other media hype about the page. You’d think White Oak deputy director and Feigenholtz PR flack David Ormsby would toss in some product placement, but even his own Springfield Political Buzz Examiner site remained silent on ownership. Full disclosure is OK, you know. even if it exposes the small circle of friends who circle jerked this bill in the statehouse.

The claim that birth parents want to deny their adopted children access to their birth certificates is a myth,” said Feigenholtz. “Nevertheless, we offer birth parents who choose anonymity to have a choice.”

4 Replies to “ILLINOIS: Feigenholtz Owns It! The website, that is.”