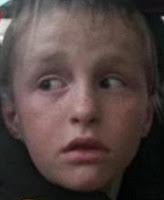 I need to spend today working on Illinois legislative matters, but wanted to get this out first.

When I saw the Google News headline my first thought was “stretching for a story.”

Then I read it.

Though the reporter made no connection between last week’s yard sale that featured “kids’ clothes, toys, car seats and stuff” and Artem’s quick departure for Moscow, I can’t help but see one. Can you?

On Saturday, neighbors who live beside the women in Bedford County said the family kept to themselves and hardly anyone knew them, but the women did hold weekly yard sales.

Chelby Clark said she even went to a yard sale at the Hansen’s home last week. “The kids may have been running around,” she said.

On Saturday, several long tables were still sitting in the front yard of the Hansen’s homes off Highway 41 in El Bethel.

Clark spoke to the women about a car seat. “I asked one lady if she could bring down a price and then she turned around and asked an older lady the same question. The older lady said she said she’d take it down by a couple of dollars,” Clark said.

She didn’t notice anything unusual, “But I guess they were just too themselves more,” Clark said.

According to neighbors, yard sales are a common sight at the Hansen’s homes.

Angeline Bailey said “they usually they had two a week.”

There was no activity at either house all day Friday and Saturday, and despite cars parked out front, there was no sign of the Hansens.

Neighbor Chelby Clark can’t remember for sure, but says “kids may have been running around.” If they were, that would probably be Artem and Torry Hansen’s biological son, Logan. Now, kids “stuff” is a yard sale staple, but could the Hansens have been selling off Artem’s “stuff” right in front of him? Erasing his “stuff” before they erased him?

We don’t know the date of this garage sale, but Nancy Hansen, in an ill-advised (for her ) interview with the press said that “they” decided to ship Arem to Ul. Tverskaya on Sunday after he drew of a picture of the house burning down. If the garage sale happened before Sunday it could indicate an earlier decision. If it happened after, but before he was dumped onto the plane, it would indicate that they were selling him off little by little while he watched, though innocent of his soon-to-be fate.

Either scenario is extremely disturbing.

It reminds me of the closing scenes of the “adoption film classic and to me the scariest adoption film ever made, Penny Serenade.

After…oh say…about six weeks of mourning the death by unnamed-exotic-illness of their beloved adopted daughter Trina, (and almost getting a divorce) compassionate adoption agent Beulah Bondi offers Cary Grant and Irene Dunn a replacement. As the film ends, we watch the newly reconciled and once again happy couple paint over Trina’s now empty room as if she never existed.

NOTE: For more on a local POV of the Hansens see the New York Times, In Tenn, Reminders of a boy returned to Russia. Of particular interest, since it suggests a pattern we have seen repeatedly in cases of Russian adoptee abuse, is the Hansens’ reported self-imposed social isolation:

Several other neighbors said the Hansens seemed somewhat disconnected from the community. The boy appeared to be home-schooled and the family did not go to the churches close by. It was hard to relate when so few details were known, they said, but even if Justin threatened violence, as the Hansens claimed, residents said he should have been dealt with here, not shipped home like a faulty product.

Some here said they were glad the Hansens seemed to be outsiders, or at least newer arrivals — it helped some of the longtime residents disconnect from the satellite trucks and reporters, many of them representing foreign media, that had descended on their neighborhood.