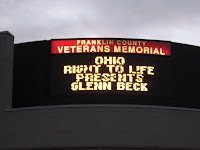 NOTE:  A slightly different version of this  was published by Columbus Free Press in the next day or so. I have written about Glenn Beck previously on the Daily Bastardette here, here,and   here.  Ohio Right to Life is the chief reason obcs remain sealed in Ohio.

Glenn Beck is more dreadful than you think.

Thursday night (October 27)  I attended Glenn Beck’s performance piece at Vets Memorial.  His appearance was sponsored by Ohio Right to Life to kick off its annual state conference and fill its operating budget (according to Beck) for next fiscal year.  Just buying a ticket wasn’t good enough. In a word of faith moment,  Beck ordered us to pull out the donation envelopes from our programs and hold them tight for the next couple hours as he  inspired us to stuff them with cash, check or credit card number.  From the looks of the beg buckets held by ORTL volunteers standing  beneath the exit signs when it was all over, Beck had indeed miraculously  turned envelopes into cash.

Lying in bed the next morning I wondered just what I could write about Beck.  There must have been something in his 90 minute one man show that was revealing or quotable or enlightening, or entertaining..  Alas!  There is none. For 90 minutes Beck paced the stage, implored, and wept over….well… something, but it’s unclear what.

When he was at Fox, Beck had time constrictions.With a live performance, anything goes. Obviously orchestrated and staged with chalkboard, Beck nevertheless gave the appearance of  running on  open-ended  stream of consciousness boosted by a couple hits of Adderall

Beck came out the gate running, telling the crowd of about 2,400 that he is not political.  “I’ve gone so far beyond  politics,” he assured us with evangelical vigor.  The audience responded with excessive applause.

Beck implored us to “follow where your heart is.” To find our “complete life.”  Instead of following our hearts, though,  for the next hour and a half we followed  Pilgrim Beck’s dark heart through a murky maze of cliches, platitudes, and God talk between monologues on early 20th century progressivism,  collectivism, eugenics, history. and a short apology for his former life as a drunk.. 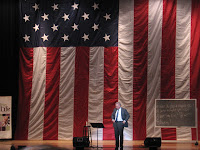 Despite Beck’s promise that he’s “beyond politics” he vented on everything from the Arab Spring (bad) to Israel (good).  He told us that he’d “dragged”  his wife on three trips to Israel this year. One jaunt included a side trip to Auschwitz.  He gave us his  firsthand but foggy account of gas chambers, ovens, and  a life-changing experience that had something to do with God and the United States.

Beck was  particularly fascinated with the instruments of Nazi human extermination, telling us that “somebody thought it [killing Jews] was such a good idea” that  they put their names on the instruments of annihilation, He failed, however, to tell us whose names.  The audience, familiar with Beckian  verbal prestidigitation didn’t need those names or a flowchart, however,  to attach  his allusion to the current  Planned Parenthood and to the historic Margaret Sanger and her unfortunate remarks on “the Negro problem.” which he quoted at length later in the show..  The virtually all-white Vet’s crowd  shook its collective head.in disbelief.  Occasional shouts of  “We love you Glenn” or “God Bless you, Glenn” rang through the hall.. Beck remained modest.

Back at Auschwitz, Beck said he left the camp “outraged at the churches” and drove around the countryside screaming, “Where were you? Where were you?” a common rhetorical trick of  evangelicals to score points against “liberal” denominations especially when they’re not around to defend themselves.

Then it came to him.  We  suffer from “self-inflicted blindness.” We see only what we want to see.  “People don’t want to see pictures of dead tissue.”  He used his own snot as an example. I’m not making this up

Beck informed us that presidential assassin John Wilkes Booth (“the Leonardo DeCaprio of his day”) “lunged” at Abraham Lincoln shortly before the president delivered his second Inaugural Address.  Booth did, in fact, attend the March 1865 inauguration  as a guest of his fiance, Lucy  “Bessie” Hale, daughter of  US Senator John P. Hale. Although Booth reportedly said later that  he’d missed an excellent opportunity to kill the president,  there is no evidence of any “lunge” or that Booth was even close enough to “lunge ” at  Lincoln.  Beck avoided the obvious question of why  Booth would  even consider pulling a “lunge” stunt in front of thousands of  more-or less friendly people, especially when up to the Fall of Richmond in April 1865, his plan was to kidnap the president, not kill him. The point of this story was…I’ve either unremembered it or it was never articulated. 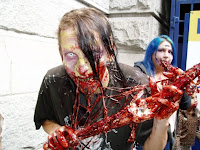 Taking another stroll down memory lane, Beck, warned us of the dangers of collectivism (aka  communism, Stalin,  and Occupy Wall Street) and eugenics (eating the rich).  He assured us that “you”  (that is, we in the audience) were probably safe from cannibals in Columbus. Maybe Wall Street derivatives pimps aren’t.

As his 90 minutes closed in on him, Beck  proffered God as the solution to all of our our traumas–and  followed with the assurance that he was quite ready to talk for another two hours.  Miraculously,  Beck’s proffer turned true. In a  few minutes God, in the form of a contract with Vets, forced Beck to wind up so Vets could tear down. 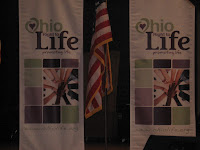 The Beck show was full of  narcissistic spectacle, but had no substance.  Ohio Right to Life and its  friends, though,  had plenty to say., and that’s the real story.

I know people who still fail to grasp that ORTL owns the Ohio legislature.For them, especially, here is Mike Gonidakis’ list of funders and supporters of  the Beck performance–the creme de la creme of the Ohio Republican Party  with only John Kasich absent–and then in name only.

The anted-up included Ohio Secretary of State Jon Husted,   Ohio Attorney General Mike DeWine, Ohio Auditor Dave Yost, Cong. Jim Jordan, Steve Stivers, Pat Tieberi,  Bob Latta,  Steve Austria,  Jim Renacci,  Bob Gibbs,  Steve Chabot, and  Ohio Senator from Columbus,  Jim Hughes. Jordan, Latta, and Yost were among state pols commended for donating blocks of tickets to ORTL local affiliates enabling the less fortunate to attend.  (While waving his envelope around on the stage, Beck commiserated with the less fortunate in the audience declaring he’d be there with them himself some day.)  Gonidakis said 65 state affiliates were represented at the event, and people had come from as far away as Kentucky, Indiana, Pennsylvania, Illinois and Colorado to attend.

Gonitakis made a special effort to acknowledge National and Ohio Right to Life founder, Dr. Jack Willke.  Willke recently walked off the ORTL board in a very loud huff,  taking Cincinnati RTL and others with him, after the board refused to support HB 125,  the Heartbeat bill (not to be confused with the Bachmann’s federal proposal) that would virtually outlaw all abortion in Ohio. The  Ohio bill originated with Willke and his protege, former ORTL leg director and evangelical rock star  Janet Folger Porter. (Faith2Action and Ohio ProLife Action.)  The consequences of the the split are yet to be seen.  Several times, Gonidakis  acknowledged support from the Tea Party (however that’s defined nowadays), so much so, that I wondered just how much money “the Tea Party” has tossed ORTL’s way, and marked it down as something to look into later.

Six years ago, Forbes sat on the board of Rod Parsley’s Christian domionist Reformation Ohio and spoke at its launch on the statehouse lawn in  November 2005. (“Coup d’etat in Ohio?”  (Free Press, hardcopy, November 15, 2005; Theoconia, July 11, 2006 .  Also on the board was then-Ohio State Rep Linda Reidelbach, now a founding board member of  Willke and Folger Porter’s challenge to ORT: leadership,  Ohio ProLife Action.

Strategy Group for Media , producers of “effective and engaging political advertising for conservative, pro-life candidates across the nation” was on hand with swag and promo videos of various Ohio politicians pushing ORTL.  SMG’s clients include John Kasich, Rand Paul,  John Boozeman, Jim DeMnt, Joe Pitts, and overall, the Ohio Republican Party..  It operates out of several locations, including Delaware, Ohio.

Non-profits:  Heartbeat International (home base, Columbus), Teachers Saving Children, Inc, (Ohio Chapter endorsed by Jack Willke),  A Voice for Life (an anti-abortion documentary based  in Mansfield and endorsed by Willke), and  VoteYesOnIssue3.com (Columbus). 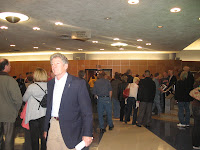 I’ve attended numerous evangelical and quasi-evangelical events, some of which I’ve written about for the Free Press and Theoconia. .  These include the 1999 D. James Kennedy’s Center for Reclaiming America conference at Coral Ridge Ministries, in Fort Lauderdale;  the 2001 Christian Coalition  Road to Victory Conference in Washington DC   (speeches from dozens of nationally elected officials and rightwing celebrities such as  Tom DeLay, Pat Robertson,  Phyllis Schlafly,  Pat Boone, Ehud Olmert, Alan Keyes, Jim Inhofe, Ernest Istook, Donna Rice Hughes, Lindsey Graham, and a outbreak of tongues  for Israel);  a half dozen Teen Mania stadium events (“Teen Mania: Lift the Banner,” Free Press, hardcopy July-Sept 2006;   Theoconia, July 27, 2006;  the 2005 Operation Save America invasion of Columbus, and related events,  and many smaller events and get-togethers in Central Ohio. This, however, was my first ORTL event.

There was little difference between  the spirt, aesthetics, and message of those events and the Glenn Beck one man show, except Glenn lacked the dog and pony that are standard fare with the big boys and girls. .  Praise music and prayer, an American flag as big as your house, the linking of ORTL’s  anti-abortion crusade to the American state, Christian conversion (even if Beck is L-d-S)  all  enabled Ohio Right to Life to slip out of its public quasi- secular costume and slip into its something-a-little more-comfortable Armour of God. 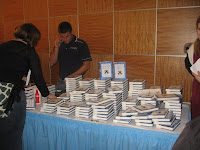