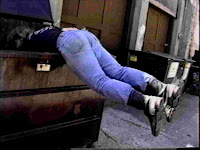 This morning’s Atlanta Journal-Constitution identifies the “desperate mother” as Tysheema Brown, 33, of Smyrna.

No details, though, on how she managed to drive an allegedly uncontrollable kid 1000 miles all by herself. Did she handcuff him? Lock him in the trunk? OD him on Dramamine? Did he arrive in a straight jacket?

According to Lincoln Police Chief Thomas Casady, who has been less than happy with the Nebraska Fiasco, the county attorney’s office will file a petition in juvenile court and a judge will decide whether to keep the boy under state protection or reunite him with his family.

No word if DHHS intends to contact Georgia authorities. It’s a sure bet, though, that Georgia officials will get involved as have Iowa and Michigan agencies in those out-of-state cases.

Finally, you’ll really enjoy this: a quote from Tim Jaccard, founder of New York’s AMT-Children of Hope Foundation and now the president of the National Safe Haven Alliance (I guess Tom Atwood bailed):

When children are older they have the ability to understand what’s going on, and they’re thinking, “Mommy and Daddy don’t want me anymore, so they’re throwing me in a hospital.” That’s a psychological blow.

Does Jaccard really believe that babies and big kids don’t share the “psychological blow” of being dumped? That it’s only big kids who are traumatized by abandonment?

Baby dump laws and sealed records are part and parcelof the adoption industry: adoption anonymity and the sealed records system. The laws were only legislated when adoptees took back their right to identity and birth records. And it’s backfired.

Big kids with names and histories, especially ones with diagnosed behavioral and mental disorders are about as marketable as Chinese baby milk.

Children are not chattel. No child, no matter what age, should be abandoned willy-nilly, especially with the permission and promotion of the state. Families, mothers and children are in “crisis” across this country and the only solution given is to dump the kid and walk away? Is that the bar we want set in the United States?

11 Replies to “GEORGIA ON MY MIND MORNING UPDATE”