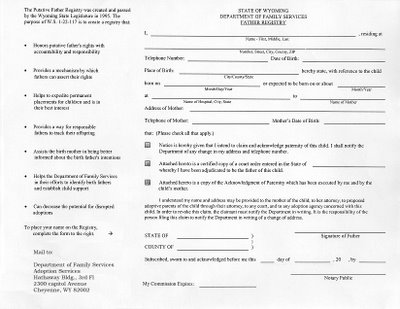 Bastardette’s co-conspirator Erik Smith is scheduled to appear on the National Public Radio’s Talk of the Nation on Monday, March 27. He’ll appear with adoption lawyer and University of Missouri law professor Mary Beck and Columbia University Law professor Carol Sanger for a discussion of natural father rights and putative father registries. Talk of the Nation is aired generally from 2-4 pm est. Go here to find the time and station in your area

Erik was featured in last Sunday’s New York Times front page top of the fold article on natural dad rights, Unwed Fathers Fight for Babies Placed for Adoption by Mothers . He was also a guest on CNN’s Anderson Cooper 360 Degrees show last Monday with Mary Beck and Adam Pertman, director of the Evan B. Donaldson Adoption Institute. A transcript of the show is here (scroll a little past half-way down).