Emelyantsev, 34, faces 1-15 years in prison on a charge of second degree felony child abuse homicide in the March 7 death of 14 month old Russian Down Syndrome adoptee Nikoli Emelyantsev. She admitted dropping Kolya on his head “out of frustration” a day earlier. He died of a significant skull fracture caused by blunt force trauma to the head. Court documents indicate that Kolya also had bruising on his face, head, knee and anus. Emelyantsev was charged originally with 1st degree murder, but pled down in June. 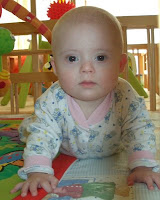 Koyla lived with his Forever Family less than a month when he was killed.

Kimberly and her husband, Russian national, Fyodor Emelyantsev, were also charged with third degree felony child abuse due to the alleged malnourishment and dehydration of 4-year-old, Luka, adopted by the couple from Russia two months earlier. Those charges were dropped in June due to insufficient evidence, and F. Emelyantsev was released from jail. K. Emelyantsev has remained in jail under a $500,000 cash-only bond.

Luka has Down Syndrome as does K. Emelyantsev’s 10 year old biological daughter from her first marriage. Luka was adopted via Adoption Ark; Kolya through About a Child. (Russian sources claimed they were independent adoptions) The agencies are now Hague accredited; About a Child was accredited just days before Kolya’s death. Both children were part of Reece’s Rainbow Down Syndrome Orphan Ministry that helps place DS children for adoption worldwide. The couple also has two biological children, 5 and 2. The Emelyantsev children were placed with a maternal uncle in nearby Dugway after the arrest of their parents.

Emelyantsev’s family and friends gathered en masse in Judge Kouris‘ courtroom Friday t0 show support, but the judge warned they would not influence his sentencing decision. You can read earlier comments from friends (and the not so friendly) on this local ABC4 forum. Other friendly comments, are here.

The Emelyantsevs, in fact, seem to have gathered quite a bit of local sympathy as family and friends hit the Internet portraying Kimberly Emelyantsev as a blameless martyred babysaver persecuted and prosecuted by an overbearing and over-zealous legal system out to make some unrevealed “point.” These sentiments are expressed nicely in a post by Rochelle Christley who describes herself as “close family of the Emelyantsev’s” and has defended the couple on various web and news sites:

As we said in the beginning, this was an accident and Kim is innocent. Anybody who has dealt with our justice system, a prosecutor with a point to prove, or just has no money to defend themselves knows that sometimes people are put in a terrible position. Go to trial and risk spending most of your life in jail or take a plea because a child was hurt in your care and the law demands that some kind of restitution be paid.

The probable influence of LDS cannot be dismissed. Unfortunately it will also probably go unexplored. Though no Mormon population figures can be located for Tooele County, 21 of the county’s 33 churches are LDS. Given those demographics and the fact that the Emelyantsevs are identified as Mormon and K. Emelyantsev reportedly was a paralegal in her church office (no church or ward listed) it is highly likely, then, that LDS Social Services was involved in the adoptions. Possibly a local affiliate conducted the home study. Since LDS holds a stranglehold on adoption in Utah, information on its involvement won’t be forthcoming.

Deputy Tooele County Attorney Gary Searle initially took a hard line approach on Emelyantsev, charging her with first degree murder. Calling her a flight risk he asked for a $1,000,000 bond. Later his position softened. When Emelyantsev pled guilty to the lesser charge of second degree felony manslaughter, Searle said that although the death of Kolya “wasn’t an accident, it wasn’t intentional either.” While amended charges may well have been in order, Searle, in my opinion, made an extraordinary move for a prosecutor last week. According to the Salt Lake City Tribune:

It was Deputy Tooele County Attorney Gary Searle who asked that Emelyantsev have the diagnostic evaluation before sentencing. He said both the Russian children, as well as one of the couple’s three biological children, have Down syndrome and “demanded a lot of attention.

(1 ) Isn’t such a request the job of the defense not the prosecutor? Did heat come down from LDS or Searle’s boss–beholden to LDS votes– to mitigate the initial prosecution? Did the prosecutor play public good guy in requesting the evaluation? (2) Shouldn’t a mental evaluation have been made between the dates of the plea and sentencing hearings?

Unfortunately, the legal manoeuvring that followed the arrests of the Emelyantsevs, has gone unreported, and Searle’s contradictory prosecution (go here for some Salt Lake City Tribune reader comments on it) has increased the difficulty to figure out what’s going; thus, leaving us with many questions:

Why were additional charges dropped against the couple?

What role (if any) did F. Emelyantsev play in the prosecution and plea bargain of his wife?

Why did About a Child allow the placement of Koyla with the Emelyantsevs so soon after they had taken custody of another institutionalized non-related Russian DS child ?

Did Adoption Ark know the Emelyantsevs planned to adopt a second institutionalized DC child from Russia immediate after Luka’s placement?

Has any agency been investigated by their individual state’s social services of attorney general?

Last June Gary Searle said more details regarding what actually happened to Nikolai would come out at sentencing. A odd denouement to be sure.

Emelyantsev, scheduled originally to be sentenced August 15, will return to court on October 10. Given the support the prosecution has offered Kimberlely Emelyantsev, I won’t be surprised if she tales a walk in the park.

NOTE: Most news reports of the Emelyantsev have gone it paid archives I am using Pound Pup Legacy’s permanent archive of articles when necessary.