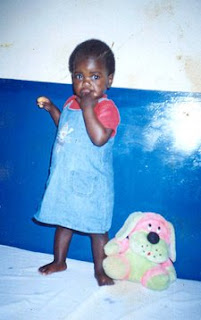 As I Twittered a little while ago, Madonna’s petition to adopt Mercy James was denied. Her lawyer Alan Chinulahas has filed an appeal.

I haven’t found the complete text of Judge Esmie Chondo’s ruling online. The best coverage so far, though, comes from the Mail online, including pertinent quotes from the ruling:

The court turned down the singer’s request for an interim adoption of a second child because she has not satisfied a requirement that prospective parents be resident in the country for 18 to 24 months. Madonna’s lawyer has said she would lodge an appeal.

The judge noted that Madonna had jetted in just days prior to Monday’s hearing.

This means the 50-year-old singer cannot take custody of Chifundo – whose name translates into English as Mercy – or leave the country with the child, usually the first formal step to granting a full adoption.

Judge Chombo (right) said: ‘The issue of residence, I find, is the key upon which the que

stion of adoption rests and it is the very bedrock of protection that our children need; it must therefore not be tampered with.

‘As wisely put by G K Chesterton: ‘Don’t ever take a fence down until you know the reason why it was put up.’

Madonna was not in court to hear the ruling, though her lawyer did attend – until he left through a back entrance after learning the news.

Key to the judgment, said Judge Chombo, was the meaning of the word ‘residence’.

‘Residence denotes some degree of permanence. It does not necessarily mean the applicant has a settled headquarters in this country,’ said Mrs Chombo, quoting previous legal precedents.

‘It seems dangerous to try to define what is meant by residence. In the present case, I can only answer that question in the case of [Madonna] by holding that she is not resident in this country; she is merely a sojourner here during a period of leave.’

She added: ‘Consequently, a person is not entitled to claim to be a resident at a given town merely because he pays a short, temporary visit.

‘Some expectation of continuity is a vital factor, which turns simple occupation into residence.

‘Ms Madonna may not be the only international person interested in adopting the so-called poor children of Malawi.

‘By removing the very safeguard that is supposed to protect our children, the courts by their pronouncements could actually facilitate trafficking of children by some unscrupulous individuals who would take advantage of the weakness of the law of the land.

‘Anyone could come to Malawi and quickly arrange for an adoption that might have grave consequences on the very children the law seeks to protect.’

Judge Chombo, who did not announce the ruling in person but handed it to the court registrar to make public, added: ‘As I make the order I am acutely aware of the high expectations that the family of CJ (Chifundo (Mercy) James) and possibly other independent well-wishers, had about the unlimited opportunities that the proposed adoption would avail CJ.

‘I have no doubt that all hope is not lost with the petitioner’s noble and immediate ideas of investing in the improvement of more children’s lives in Malawi.

‘It is my prayer that CJ would be among the first children to benefit from that project.

‘Having said all this then, at the end of the day I must decline to grant the application for the adoption of the infant CJ.’ 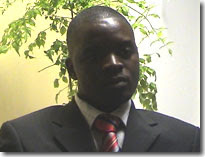 Mavuto Bamusi, national coordinator, Malawi Human Rights Consultative Committee: This is a triumph for the children of Malawi,Inter-country adoption is not the best way of providing protection to children … they should grow up in familiar cultural and religious surroundings,” Bamusi said, adding that “supporting children from outside our country only helps five of the 1.5 million orphans we have.”

There’s no official response from Madonna yet, who did not attend the hearing, but ex-husband Guy Ritchie issued a statement:

Madonna is a fantastic and loving mother who cares deeply about her own children, and children who may need additional help and support.

“I fully supported Madonna in her decision to apply for this adoption, and I am saddened that her application has been rejected. She is motivated only by being a caring parent who seeks to share some of the advantages and opportunities that her life has given her. This time it did not work out, but there will be other opportunities and I wish her well in them. She is a great mum.”

It was a different story last night, though, when Madonna and her charity, Raising Malawi, partied with Mercy’s uncles Peter Baneti and John Ngalande, who Monday signed off on the adoption. Baneti told US “Mercy is now assured of a good education away from the abject poverty of our village,” Madonna has assured us she will not cut her ties with us.” (NOTE: apparently they hadn’t spoke to Yohane Banda)

The pre-adoption party included a truckload of traditional Malawian dancers shipped in to the exclusive Kumbali Lodge where Mercy and her keepers have been holed up for the the last few days. 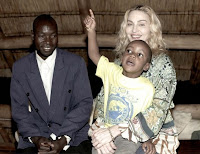 In other news, David Banda was able to visit his father Yohane Banda this weekend for the first time since his removal to MadonnaLand. David did not recognize his father and they spoke through an interpreter. The Mail online published an account of the reunion and a picture. Here is part of it:

It was the first time the little boy has seen his father since leaving Africa in 2006 – despite Madonna’s vow for ‘an ongoing relationship with David’s Malawian roots’.

Father and son, who met at Madonna’s lodge in Lilongwe, had to speak through a translator.

‘He asked me whether I ride horses,’ Mr Banda said later. ‘I told him horses are for the rich and he asked me why I am poor. He told me his mum likes riding horses and that he too rides horses.’

But the peasant farmer, who gave David up for adoption when his wife died weeks after childbirth, revealed his son did not recognise him.

He asked me who I was,’ Yohane said after the scheduled meeting.

‘When I told him “I am your daddy” he looked surprised.

‘It’s amazing how David has grown; I can’t believe he is the same small and sickly baby we left at Home of Hope.

‘He seems to be a polite boy for he asked if he could sit on my lap. Then he started playing with my nose; I don’t know why.

‘He is quite chatty and intelligent. He asked me lots of questions about lots of things.

‘He told me a story when one day he and his brother, Rocco, rode horses and fell. He told me his mum spanked him because they are not supposed to ride horses on their own.’

Johane revealed how David spoke warmly of his adoptive parents.

‘He told me his mum plays music and asked me what I do for life,’ he said.

‘I told him I was a farmer. He asked what a farmer does and I explained to him that we use hoes to till the land.

He told me his daddy, Mr Ritchie, took him to a farm but it had a tractor. I told him in Africa we use hoes.’ 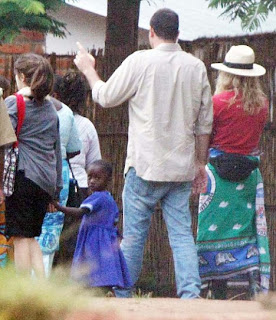 It’s easy for all of us, no matter what we think about Madonna’s adoptions to pass judgment. The truth is that adoption is a game for grown-ups with all their agendas and needs, and neuroses. Children are the voiceless pawns in their game, shuttled around the board for what players claim is their “best interest,” an interest never clearly defined outside of platitudes.

I’m glad the petition was rejected but how does this turn of events effects Mercy? She is a child, not a symbol or an object. She is only 4 years old. We don’t know what she’s been told, what she expected, what she wants, what she feels. And nobody is about to ask her. She’s only 4 years old and she doesn’t know about the politics of poverty, adoption, or Madonna.

I’m saving my snark for the entry immediately above this.

4 Replies to “"DON’T EVER TAKE A FENCE DOWN UNTIL…": NO MERCY FOR MADONNA”