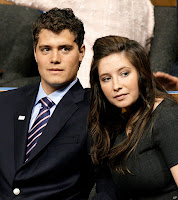 Well, it didn’t take long! Hardly had Bristol Palin announced her break-up with Levi Johnson when somebody asked: Should Bristol Palin’s Baby Have Been Put Up for Adoption?

The whole political debate has assumed that there were only two choices — keeping the baby and having an abortion. Given the long waiting lists of people trying to adopt, wouldn’t offering the baby for adoption have been just as compassionate as raising the child alone?

And boy, is he getting dumped on! Some of the biggest dumpers, in fact, are adoptive parents. Janice Taylor, another HuffPo blogger responded:

My daughter is adopted,and I think I’m going to surprise you with what I am about to say. I believe that – whenever possible, teenager or not – the child should stay with their mother. The teen mother will need support, for sure – but she doesn’t have to get married. Bristol is a good example of a young mother who has plenty of support, with or without Levi.

I’m happily surprised that so many responders stuck a fork in Waldman and his offensive presumption that Bristol Palin should have been a “compassionate” incubator for the childless and desperate.

Bristol’s decision to be a single mom is nobody’s business but hers. I wish her the best.

Heads up to Mirah Riben for this story. Mirah posted her own incisive comments. I’m heading back over there now to post my own.

March 13, 2009 10:99 AM:
Addenda: After I put up this entry something else occurred to me. The title of Waldman’s piece Should Bristol Palin’s Baby Have Been Put Up for Adoption?”

Waldman wrote Bristol out of the narrative, making her the passive “birthmother” who has or should have no say in the disposition of her son. Bristol doesn’t exist for Waldman. Waldman, in fact, de–babys her. I generally don’t like this term, which I think was coined by Di Welfare, but in this case it fits. Bristol–and her baby–are the attainment of someone else’s desire, possessing no humanity or rights of their own. And this is ugly.

12 Replies to “DO-GOODER ALERT: SHOULD BRISTOL PALIN’S BABY HAVE BEEN PUT UP FOR ADOPTION?”