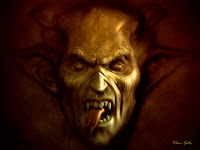 The nominations are in!

Only one can win!

The nominees for this year’s edition of Demons of Adoption  are:

For more information and to vote go here!

PS  I admit it . I nominated Adam Pertman