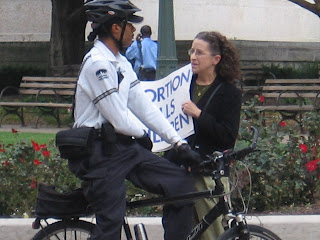 I’m working on more Nebraska material, but in the meantime, here’s something I posted last week on my Theoconia blog regarding the Columbus Life Chain event last week. It’s adoption related.
******

I just returned from the the 2008 edition of the Most Boring Abortion Protest in Columbus: Life Chain. (October 7).

Life Chain is a yearly October event held throughout the country. It’s billed as “a peaceful, prayerful public witness of pro-life Americans standing for one hour praying for our nation and for an end to abortion.” It attracts mostly middle class retirees and SAHM-types who wouldn’t dream of showing up in front of CapCare or Founders or shutting down City Hall for a week.

In Columbus this means that “respectable” anti-aborts and their kids too young to object to being tricked out, come out to flank the Statehouse, carrying unobtrusive signs that remind the public “abortion hurts women” and “adoption is a loving option.” Never mind that many natural mothers, forced to send their de-parented bastard babies to the adoption mill, would disagree with them. 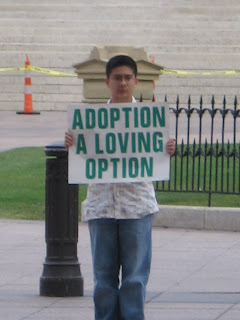 Whatever. Life Chain locally is bereft of Meansies in Blue Beanies, aggressive Bible bangers, traipsing chanting prayer warriors, blown-up lurid baybee blender bits poster carriers, shofar blowers, and “truth trucks” (unless CBR -Midwest or other graphically oriented folks decide to glom off the event). This doesn’t mean, however, that Life Chain, Minutemen United, and Operation Save America are 10,000 miles apart, even if their denizens refuse to admit it. Neil Horsley excluded. Sort of.

I wrote about Life Chain in 2006: Life Chain: The Kool-Aid Test. Instead of repeating what I wrote there, I suggest, you read my original entry so you’ll see the similarities between Life Chain and the more outwardly militant–similarities hidden from all but the mosts curious local worker bees,.

It is difficult to tell how many Life Chainers attended since the demo was held during rush hour and bus stop loiterers were mixed in with the crowd. It looked, though, that 70-80 people showed up this year. There were plenty of babies and toddlers in strollers (aka “abortion survivors” since anyone born after Roe is considered to have survived abortion), but the old priest and cranky cross-wielding nun were missing. (see 2006 pictures. NOTE: Blogger is being flakey with the pictures in this entry, but they ARE there.) A younger priest, though was thronged by a group of women.

Does Columbus Life Chain accomplish anything besides making “respectable” demonstrators feel good about themselves and perhaps serving as a funnel though which a handful of folks will fall out the other end into the arms of their more radical fellow travelers? I have no idea.

I left early since I needed to go home and watch some paint dry. I caught the bus a couple blocks south of the Statehouse. When we got up to the Statehouse, the Life Chainers were posing–signs in hand– for a group photo. Somebody on the bus asked to no one special, “what ARE they doing?” and then saw the signs. eeecchhhh….At least one person wasn’t impressed. 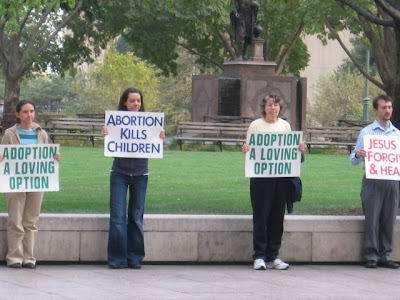 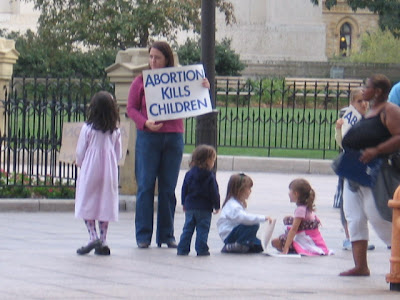 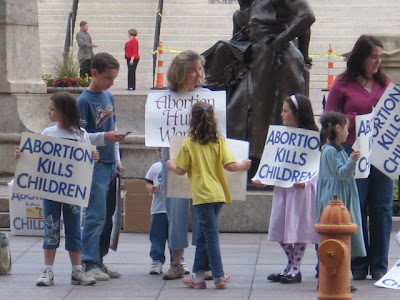 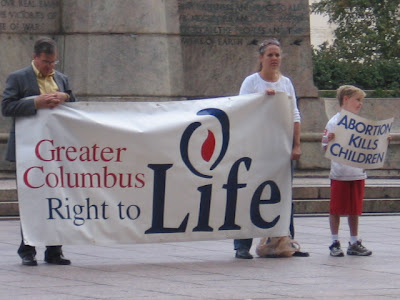 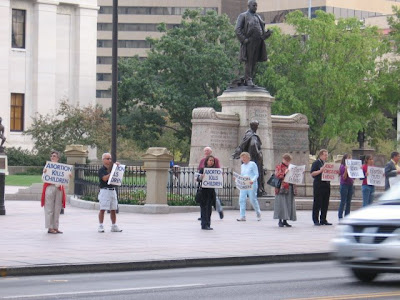 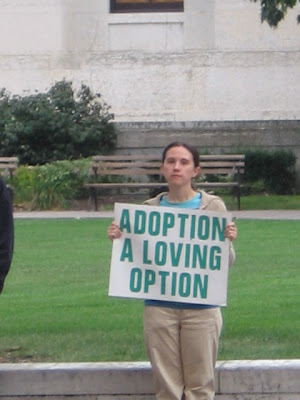 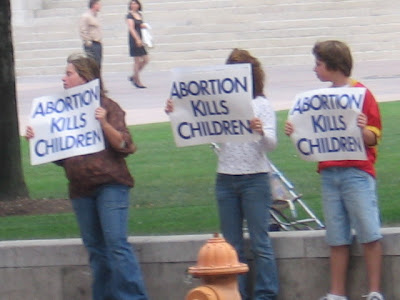 Go to the Life Chain website and punch in Ohio (under “National Listings”) to see where other Life Chain events in Ohio (or in your state) are taking place this month.

6 Replies to “COLUMBUS LIFE CHAIN: THE MOST BORING ABORTION PROTEST OF THE YEAR”