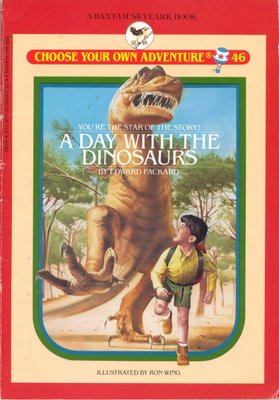 In case you’ve been wondering why Basdardette has been AWOL since mid-May, she’s been traveling, writing a couple non-adoption articles for publication, and generally goofing off. If you disbelieve, witness her latest adventure with the National Council for Adoption–documented. 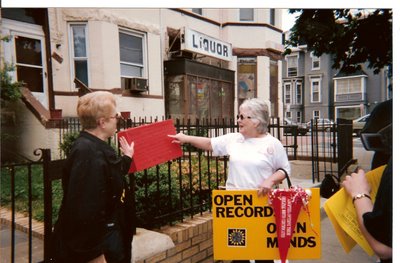 I was in the Washington area in early June. Feeling mischievous I headed out to Alexandria one morning to check out the (relatively new) NCFA office. ( Now, I’d seen it before, but not up close. I was curious, among other things, to see if it still shared space with the wedding dress shop, which I guess is better than the liquor store next to the old DuPont Circle office.
(Though I suspect, a handy liquor store may have been in order in those days). Of course, driving by just wasn’t good enough. Guided by our politically incorrect Muse, my Cowtown companion and I found ourselves taking pictures of each other in front of the building–and worse–doing a photo-op on the steps. We were obviously asking for it.

Soon, I heard my name, plaintifly wafting through the air, followed by half the NCFA staff trooping out the door to greet us: Lee Allen (Director of Communications), Mary Green (Administrative Director), and Chuck Johnson (Training and Agency Services Director)–all with hands thrust out in greeting –not self-defense! NCFA prez Tom Atwood joined the jolly luv-fest and posed for a picture. I’ve chowed down a bit too much lately (road trips will do that!) and came unprepared for my own photo-op, wearing singularly unattractnve fat clothes but for the sake of history, I’ll post some here. Thrilled (for other reasons than BN) that Conntecituct governor Jodi Rell had vetoed the Bastard Nation-opposed wretched piecemeal reunionist adoptee-hating, semi-records access crap HB 0004 bill, (pro-choice Jodi was horrified at the thought of some teenager getting an abortion–or safe havening–if 57 year old adoptees got their identity rights restored), Lee suggested BN and NCFA issue a joint press statement. Hmmm, I don’t think so. Unless NCFA’s gonna co-sponsor an unrestricted access bill in Utah with BN! NCFA’s resident biker chick, Mary Green, admired my tats–and she had a bod-full herself. Everyone assured me that this is not Your Father’s (or should we say Our Bill’s?) NCFA. Curiously, I was told that the current staff holds divergent views on all issues including Baby Moses/Safe Haven laws. I think I heard a hob-nailed boot drop in heaven. The whole thing ranked up there in weirdness with Ron Morgan’s LA limo ride with Bill Pierce and Troy Dunn and my 2000 crab quesadilla Margarita lunch with Dr Pierce and Pat Purtill.

By the way, NCFA is a fan of fan of Bastardette, though I won’t hold out for groupies yet. 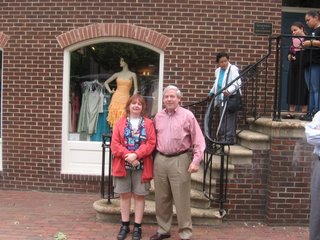 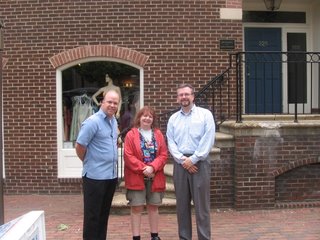 10 Replies to “BUSTED BY NCFA: ADVENTURES IN DINOLAND”