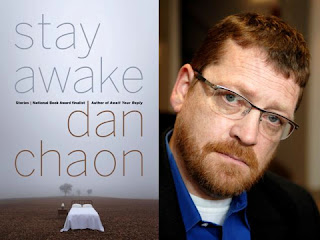 Dan Chaon, Ohio’s unofficial adoptee laureate just keeps racking up the honors, His newest collection of short stores Stay Awake: Stories, has been nominated for the 2012 Goodreads Choce Awards. in  the Horror division.  I haven’t read the book yet,but it’s described as “set in post-recession America, where dreamers, losers and troubled souls feel like ghosts in their own lives.”

You don’t have to write “horror” to write horror!

I’ve written about Dan before here,. here,  and .here. His 2001 collection of short stories, Among the Missing described as “a gripping account of colliding fates, the shifty nature of identity in today’s wired world and the limits of family” was a National Book Award finalist. It was also named one of the year’s best books by the American Library Association, Chicago Tribune, Boston Globe, and Entertainment Weekly and made the New York Times Notable Book List.  His first novel, You Remind Me of Me (2004), , is an adoption-related (and so much more) examination of identity, fate, and circumstance. It was named one of the best books of the year by The Washington Post, Chicago Tribune, and San Francisco Chronicle.

A riveting thriller, chock-full of plot twists, and a sober meditation on the erosion of identity in the age of technology . . . There’s a bristling momentum that develops, as in any great tale of suspense. . .  [Chaon] writes with an eloquence rarely seen in the world of page-turners.”

Dan jokes on his Facebook page that he has ‘ta chance for the Goodreads  award since he’s up against
Justin Cronin’s The Twelve!   Go here to vote.   I think you need to belong to Goodreads to vote,


When I finish the two books I am currently reading I think I take on a Dan Chaon reading marathon. Although I’m   generally a nonfiction reader (except for mysteries)  I find that literature is a much more satisfying vehicle by which to explore  adoption, identity,  and dislocation.
‘
You’ll find an audio interview with Dan here where he discusses Staying Awake, adoption, the loss of his wife to cancer, and more.

Dan lives in Cleveland and is  the Pauline M. Delaney Professor of Creative Writing.at Oberlin College.