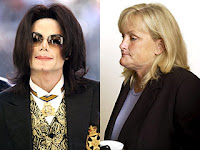 Bastardette feels a major migraine coming on. This showed up on TMZ this morning: Jackson/Rowe not the biological parents.

Multiple sources deeply connected to the births tell us Michael was not the sperm donor for any of his kids. Debbie’s eggs were not used. She was merely the surrogate, and paid well for her services in the births of Michael Jr. and Paris.

In the case of Prince Michael II (the youngest), we’re told the surrogate was never told of the identity of the “receiving parent” — Michael Jackson. Three days after Prince was born at Grossmont Hospital in San Diego County, Jackson’s lawyer came to the hospital to pick the baby

Now, US Weekly reports that the father of of the older two is Jackson’s dermatologist and Debbie Rowe’s former boss, Arnold Klein.

He is the dad,” says a Jackson insider. “He and Debbie signed an agreement saying they would never reveal the truth.”

OK, this is all tabloid hearsay, so far, but it’s gone out all over the wire. I hope it’s not true, but it wouldn’t surprise me, either. Well, some of it does. I never seriously expected to read that Debbie Rowe isn’t the bio mom of the older kids.

This will get so ugly so fast.

Who’s the daddy?
Who’s the mommy?
Where’s the money?
Where the kids go. Of course!

I can’t think of anything more illustrative (along with Octomom) of the American baybee-making-it’s-all-about-me-me-me mania that lets little real human beings be artificially created, anonymized, trafficked, and abused for the pleasure of “adults.” These freaks should have been locked in cages at Neverland, a prime exhibit of Menken’s boobus americanus.

To top if off, there’s stories circulating that Jackson didn’t have a will, but the Wall Street Journal now reports that a 2002 will, leaving the bulk of his estate to his mother Katherine, his kids, and at least one charity will be filed on Thursday. His father Joseph Jackson was reportedly cut out. Thank goodness for small favors!

After the debt is cleared it’s estimate about $200 million will be left.

By the time this is settled Prince Michael, Paris, and Blanket will be grandparents. Unfortunately,,the most intimate parts of their lives will, by then, have gone down into American pop folklore.

If I could say something reasonable about this, I would. But I can’t.