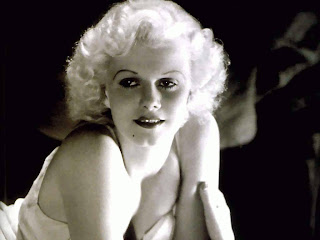 I’ve always loved Jean Harlow. and have taken it personally that she was taken from us at such young age. (2011 is the 100th anniversary of her birth).   Back in the day, her films, including PreCode supposedly not fit for children or Presbyterians,  were shown regularly on local television morning, noon and night.  Now they are only available on DVD and Turner Classic.

Last week  in a battle of the blondes evening, TMC showed Bombshell.(1933) one of the films  I missed in that heyday of footloose TV or disappeared from my memory, but I can’t imagine how. I was really tired,  but forced myself to stay up and watch.

I don’t know for a fact, but I think Bombshell  is the first (at least full length) parody of Hollywood made by Hollywood. It  is certainly the first and as far as I know only  Hollywood send-up of Hollywood adoption.

Adoption is only part of the fun, but the part we care about, so I’ll cut to the chase.

Getting back into Lola’s good graces after she fires him for last night’s headline garbage run of “negative publicity” (getting her latest beau, Marquis Pisa de Pisa, arrested  at the Coconut Grove by immigration agents for overstaying his visa),  hack publicity agent Space Hanlon  sends a reporter from that old stand-by,  Woman’s Home Companion, over to Lola’s to write up a piece on her homey side. Impressed  with Lola’s baking skills and her kitchen frock straight from Adrians’ closet,  the frump reporter, warbles on asking Lola if she  ever dreams of a higher calling:  motherhood.   You can almost hear the violins que up. Next to the chaos around her, motherhood looks like a cinch. And who cam blame her?

Upon minutes of the reporter’s departure, Lola shows up at the door of the Fairfax Foundling Orphanage conveniently housing dozens of children  Lola shares a few sweet minutes with a boy of about 6 months and decides he was born to be hers. Of  course,  even Lola just can’t take him home.   Adoption is serious business.  They just don’t give away babies out there, even if it is Hollywood. Lola needs the orphan ladies stamp of approval.

Within another few minutes, or rather that afternoon or lunchtime (it’s hard to tell) the orphan ladies arrive at Chez Lola.  Lola soothes them with tea and cakes and  rhapsodizes on her mission of motherhood  Just as she’s hits her stride, Lola’s neer-do-well father arrives in the kitchen with her drunken brother and a lady he’s picked up in Phoenix (I think).  The three get a lecture and the bum’s rush upstairs. Lola returns to her matrons. We just know this won’t go well.  It doesn’t.

Back in the sunroom, the orphan ladies begin to “study” Lola.

“And just how long have you been considering adopting a child?”one asks.

At about this point,  “it” really begins to hit he fan.  The familial leeches wander back downstairs, Hollywood reporters , tipped off by Space  that the star is expecting,, hit the door.  Inquiring minds want to know:  Who’s the daddy? The Marquis Pisa de Pisa?  Adoption is even hotter news!  A ring-around-the movie-star chase  worthy of the Three Stooges  proceeding driving out the matrons, the family, the reporters, and ultimately Lola. The Stooges, in fact, Healy’s Broadway proteges, were scheduled to be in the film, but never appeared.

The whole arc adoption runs  only about seven minutes, and serves as the point of take-off for more fun, but but for adoptafilmphiles, its worth the ticket price.

None of the adoption scenes are online, but below is one of the opening scenes.  In it, the marvelous Louise Beavers, does the impossible.  Steals the scene from Harlow.

One Reply to “Bombshell: A Hollywood Adoption Send-up”