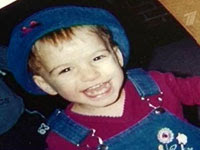 Once again, the dust and bone of a dead Russian adoptee has been swept under the rug.  After spending 19 months in jail awaiting trial (and after trial on the street waiting sentencing)  for the murder of Ivan Skorobogatov, 7, his  forever parents  Michael J and Nanette  L Craver are walking.

Vanya and his twin sister Dasha (now known as Elizabeth)  were adopted in 2003 from an orphanage in Troitsk, Chelyabinsk region, through Lutheran Social Services of the South. The agency is no longer accredited in Russia.

Vanya, lasting longer  (as far as we know) than the other dead  Russian adoptee, died on August 25, 2009 of what York County, Pennsylvania authorities describe as severe beating and malnourishment.  The autopsy revealed Vanya suffered 80 external injuries, including 20 to his  head. After a six month investigation, the Cravers were charged with homicide, conspiracy and child endangerment. In May 2010, York County Senior deputy prosecutor Jennifer Russell, citing Vanya’s age and the state’s contention that his death constituted torture, said she would seek the death penalty.

But the best laid plans…

Instead, in September this year, when the Cravers got their day, a jury of their so-called peers bought the couple’s claim that Vanya  suffered from Fetal Alcohol Syndrome  (FAS) and injured and abused himself repeatedly.  More specifically, the night before his death, the boy “run headlong into a stove.”  Not to put a too sensational spin on this, but Vanya committed suicide.just like David Polreis beat himself to death with a wooden spoon.

I need to go through trial  news reports, but from a quick scan, it appears twin Dasha did not suffer  FAS and suffered no injuries or abuse.Curious.

After the verdict came down, the Cravers were sent home to to wait for their sentencing hearing  held Friday.

The Cravers were sentenced to time served

We’re talking here about a 7 year old killed by others. Whatever degree of homicide, it was still homicide…“Never once was there an ounce of emotion by the defense toward Nathaniel Craver, or even a remote understanding of what they did to their adopted son.

The Cravers are currently on probation.  Dasha is in care, and visitation plans are under negotiation..  Incredible!

The Russian media and government  have watched the case closely, and the Russian Foreign Ministry is investigating what kind of action it can take. . The New York Times reported today:

The Cravers, who tortured the 7-year-old child to death, were released after staying a mere year and a half under arrest,” Alexander Lukashevich, a Foreign Ministry spokesman, said Saturday in a statement, according to the Interfax news service. “The court verdict is amazingly and flagrantly irresponsible.”

Russian officials said they were conducting their own investigation and might seek an arrest warrant for the couple.

I suspect that  the chance of an international arrest over the case is nil; nonetheless I’d like to see a go at it.

There’s a lot to this case; some of which I’ve written about previously..  I have to go through several trial articles, so I’m not writing a lot about the case today.  I plan to continue this blog in a day or so. In the meantime for more information, go to the righthand sidebar under “Ivan Skorobogatov.” and  Summary of All Cases. (on Nikto)

Signing off for now.,
Disgusted and Sickened.