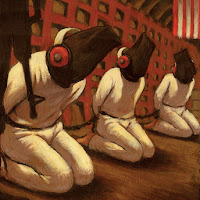 The current government considers all USians terrorists unless proven otherwise. Intimidation, once the entertainment of the petty thug, the unregulated police, and the 3rd world dictator, is now institutionalized as a legitimate activity of the US government against the people—all in the name of “security.” Airport gulags, metal detectors, checkpoints in public buildings, bizarre dress codes in schools, drug tests, free speech zones, no fly lists, library snooping, snitch sites, warrantless wire tapping and email reading, press pens, infiltration of political, social, and justice movements, embedded reporters, phony press conferences, the militarization of the police, and taser mania come to mind. Welcome to the United States of Paranoia.

Lizard Chronicles today has a very important blog for all of us who value free speech, free thought, and political dissent: Democracy is a VERB.

As LC points out, “The Violent Radicalization and Homegrown Terrorism Prevention Act” can affect all of us. Yes, adoptee rights activists, organizations, searchers,—and even bloggers–could be targeted as terrorists if this Draconian proposal passes. (It’s now in the Senate; the House passed it nearly unanimously)

About 3 years ago in my own state, under the regime of evangelical Christian Secretary of State Ken Blackwell, “Ohio Homeland Security” threatened to prosecute professional adoption searchers and search angels (if they took reimbursement for their expenses) under an obscure and vague law (ORC 4749(3)(a)(9)) that limits adoption searches for “pay”to PIs, who incidentally usually don’t like or know how to do them, and are more than happy to slog them off to people who do know how. With the state’s apparent attempt to redefine privacy as protection from government intrusion and interference in private matters to the government’s duty to protect people’s private communications and financial information (and coincidentally spy on you while they’re protecting you), adopted persons are a prime target for scrutiny. I can hear the knock on the door now.

Please go over to Lizard Chronicles and read Democracy is a VERB and click on the links. Then act.

From Democracy Is Not a Verb: 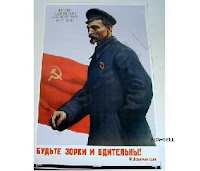 Maybe you think it’s as benign as the Patriot Act (which is not really benign at all) and that if you are an upstanding, tax-paying citizen, you have nothing to worry about. Think again. Think again, if you are passionate about anything – Pro-Life, Pro-Choice, Pro- or Against the Iraq War, Pro-Israel, Pro-Palestinian, Pro Open Records… it doesn’t matter. If you’re passionate about it (whatever it is), you could be labeled an “enemy combatant.” You or your sons, your daughters, your sisters, brothers, even your mothers or your fathers – all will be at risk if this bill passes.

Addendum: I want to clarify that Ohio Homeland Security did not initiate the investigation. It was brought by a so-called Search Angel on a mission to purify searching by removing paid, experienced professional searchers–who just happen also to advocate for records access. In snitch culture of course, this is perfectly acceptable. Turn in your competitor, your neighbor, your friend with absolutely no repercussion to yourself. In this case, the “Search Angel” shut down one of the few real outlets adopted persons and first families in Ohio have of reconnecting until records are reopened. All for her self-aggrandizement. The precedent for adoptees is scary.

7 Replies to “ARE ADOPTEES TERRORISTS?”