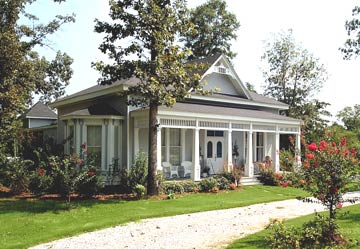 Beautiful! This just in from Andalusia, Alabama: Baby’s mom found, no charges filed.

Last Friday police were called to investigate the attempted safe havening of a newborn girl at Andalusia Regional Hospital. Normally, safe haven desperadas are met with open arms and blind eyes. In this case, though, the authorities blinked. The baby, wrapped in “soiled beach towels” and with her cord still attached, was suffering from abnormally low body temperature, a condition that led authorities to believe (reason not stated) that she had been left in an abandoned building for 12 hours before the hospital turnover. After emergency treatment in Andalusia, the baby was transported to Sacred Heart Hospital in Pensacola where she was listed in serious condition.

“[Andalusia Police Chief Wilbur] Williams said that investigators learned the woman’s identity on Saturday after receiving a tip from her husband. He said the woman cooperated with their investigation. She was questioned by law enforcement authorities, including the district attorney, on Saturday.”Williams said the man suspected his wife was pregnant, but that she had led her husband to believe that she had a tumor for which she was being treated. She delivered the baby at home while her husband was at work, Williams said.

If this isn’t a clear case of how safe havens trash the parental rights of fathers, I don’t know what is. The husband of a mother is the presumed and legal father of her child. His relinquishment consent is mandatory for a legal adoption to proceed–except when safe haven is evoked. Sorry Charlie! With safe haven “protections” mothers can lie and commit fraud legally and in secret–with the encouragement of the state–to strip husbands and dads of their parental rights and due process. In the Andalusia case, only through an investigation spawned by the the dumb “luck” of a sick baby was the father, who suspected his wife was in pregnancy denial, located quickly and the baby retrieved from the jaws of the safe haven mill.

Of course, safe haven promoters will say that this case illustrates how “the system works.” Spare me! The only reason this baby wasn’t dumped without comment is because she wasn’t dropped off nice, warm, clean, and comfy. If she’d been hand-delivered wearing a fashionable Susan Lazar cable knit Egg layette and snuggled to an Alvin & Sparky pink bunny nobody would have batted an eye. It’s a mother’s “choice.” It’s that or kill it!

We have no way of knowing that if the baby had been “surrendered” in traditional safe haven style that the incident would have been reported by the Alabama press; thus, hinting to a suspicious husband that his maybe pregnant wife maybe dumped a maybe baby. And if Mom dumped across the state line in Marianna or DeFaniak Springs or Pensacola or Bainbridge or Albany then Florida or Georgia would have tallied up another save with no connection made to Andalusia or Dad. How would he know what happened in another state? And if he did hear about an out-of-state dump, would he have connected it to his wife who maybe was secretly pregnant? The Andalusia dad can be faulted for not dragging his kicking and screaming wife to the doctor, I suppose, but husbands don’t really like to think that their wives may be in pregnancy denial or practicing hidden pregnancy. It’s well…nutty.

For now, the baby is in state custody. According to today’s Andalusia Star-News, if she is determined to be in good health, no charges will be filed against the mother, proving that without a quirk of fate, the baby would could have been lost for good.

Whatever happens to this little one, at least we know she won’t be anonymized in the safe haven baybee grinder. We hope she and her parents get the help they need. And we hope–though we doubt it–that this story will serve as a cautionary tale to safe haven promoters who think that dad’s don’t count and their rights can be flushed as easily as the rights of safe haven babies and the adoptees they’re supposed to become.

*****
For more about dads’ rights (or lack thereof) under safe haven check out Erik Smith.org, especially his articles on safe havens and “Smith v Hayes.”