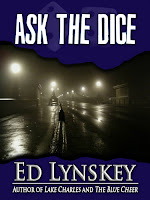 I’m a fan of adoptee noir, so it was a pleasant surprise to find Ask the Dice a member of that growing subgenre.  No doubt some adoption deformers will get the vapors at the thought of a hit man who just happens to be adopted (hit man, might be too benevolent–from the way Tommy Mack Zane tells it, the number of dead pile up in the hundreds), but as a Bastard I found it refreshing and so un-PC. Even better, he’s a TRA hit man, black and adopted by a white Washington DC couple out of an “orphan home” in Champagne’s Folly, Texas, his landing point after his parents mysteriously committed suicide, giving him an extra layer or two of adoptee angst and screwed upedness. He clearly loves his adoptive parents Amanda and Phil Zane, but feels apart, different. Being 5 or 6 years old and finding his mother Nela hanging in the kitchen a week after his father Bradford shot himself doesn’t help.Thankfully, Tommy Mack suffers no primal wound and doesn’t blame his career choice on adoption.

But back to the book.  Tommy Mack  is a contract killer for the blind, dirty-minded, and mysterious Watson Og (love the name!) the crime boss of the WDC area who lives in a crappy bungalow in order to keep a low profile and resembles (n my mind) William Burroughs in green aviator glasses. He has two hot-to-trot nieces, Gwen and Rita, in his charge (more or less) which is where the trouble starts.

See, Tommy Mack  is…well…getting tired of his job. After all, he’s been whacking skimmers, cheats, witnesses for the prosecution, snitches,  thugs a boxcar of plain troublesome people for Mr. Og since he was 18, and now at the age of 54 he’d like take down his shingle. Mr. Og has other ideas, or shall we say, he’s planning to take Tommy Mack’s shingle down himself. It was a little unclear to me just why Mr Og has a hard-on for long time trusted employee Tommy Mack, other than he has one on for everybody, and the dice shook out Tommy Mack this time around. I mean, this is a guy who will knock off his own family if they “misbehave” or even if they don’t. He seems to be in to object lessons.  Besides, Tommy Mack has a tendency to act up sometimes even to the point of fudging a hit.he deems unfair. 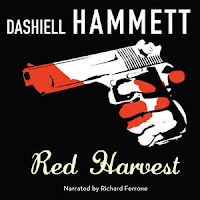 I won’t spoil the fun–too much.  After Mr. Ogg frames Tommy Mack for the murder of his niece Gwen, the cast of characters grows. Old friends D Noble from the ‘hood who’s been playing dead from AIDS  for the last few years  and Esquire, a gay hulk of a car upholsterer who favors hammers and knuckle dusters if he must; and new friends Danny, a female  Northern Virginia gun dealer  and Big  Jamal, a midget with a Glock, join Tommy Mack’s crew to eliminate Mr. Og permanently from the WDC scenery. As they join forces,   To pepper the pot, Tommy Mack, starts to draw the dots together  and comes up with some startling revelations about his own life. The denouement–well think of Red Harvest.

Tommy Mack is a traditionalist.  He abhors cell phones and has a rolodex in his head of phone booths in DC Metro. In his off-hours, he  listens to old school jazz, (especially Bird)  watches vintage black-produced  film noir,  and writes poetry. As someone who misspent much of her youthful should-be-sleeping time listening to XERB and XERF blasting all the way from the Mexican border to Canton, Ohio, I especially like his (and Lynsky’s/ *6E0 X Radio Station: Texas 1940s.

Some of the writing  in Ask the Dice is a little clunky; some of the plot and narrative improbable, but you can say the same about Chandler, Hammett, and Cain (anybody ever actually read Double Indemnity?) all of whom Lynsky seems to draw on. I was hoping that Mr Og was shagging his nieces, but alas! That is, as far as we know. Tommy Mack should have been younger by 10 years  younger to tighten up the timeline. Mr. Og is supposedly only a “person of interest” to the WDC police  (and I assume the FBI) when he’s a crime boss in the nation’s capital  connected to “the Baltimore family.”  In real life,  WDC, has plenty of criminals, but no traditional crime family  unless you count Congress. The idea that he can maintain a low profile and that Tommy Mack, even with a clean record, isn’t on John Law’s radar doesn’t make sense unless District law enforcement is more lax than my local doughnut munchers. I also found Tommy Mack less street smart that he should be, but then ,he’s used to being the hunter, not the hunted. Thank goodness for Esquire!  Despite the flaws, some of them minor, it’s a great read, especially for those of us who enjoy noir and creepy crime bosses.

Tommy Mack’s adoption  story was left open ended, even if it appears to be closed in the book. There’s a lot more going on there that we don’t know, but our protagonist has other things on his mind–sorta.–and says he doesn’t care.  He will.  He’s adopted and I’ve never known any adoptee to let their story hang. for very long.  Tommy Mack’s return to Champagne’s Folly, during a road trip, courtesy of Mr Og, was handled with sensitivity. and I’d like to see more of that part of the story.  A search for the truth that goes deeper than what’s he’s already done  I hope Lynsky and  Tommy Mack revisit and dissect the story a la James Ellroy’s My Dark Places.

A sequel?  Here’s an idea:  Tommy Mack Zane, after  returning to Champagne’s Folly to investigate  his parents’ deaths and uncover his adaption secrets, takes on the Texas adoption industry and the legislature and gets our records opened.. How Tommy Mack accomplishes this miracle we’ll leave up to Ed Lynsky..