Hey, Bastardette’s friend, BEA (Buckeyes for Equal Accss) stalwart, and blogger Dawn Friedman takes the National Council for Adoption to task big time in BITCH today! Adopt-ation: A feminist take on the state of the adoption industry (NOTE TO DAWN: How can Bastardette pitch to BITCH!)

Here’s a couple snips (NOTE: go to the original to download her links. Some aren’t working with this format) 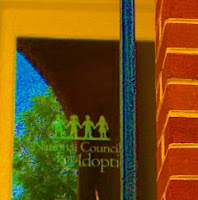 The NCFA is so all about adoption that they commonly speak out against the rights of adopted people to make their point. Their fight against the open records movement, (which argues that adult adopted persons have a right to their original, pre-adoption birth certificates) is based on the belief that it causes people to abort otherwise adoptable children.

Obviously, some number of women with unplanned pregnancies, who would otherwise choose adoption, would choose abortion if they could not choose adoption with the assurance of privacy. What that number would be is impossible to tell, but what does it need to be? The loss of human potential from even one abortion that would have been an adoption is unknowable. And the ratio of adoptions to abortions in New Hampshire is already extremely low. In 1996, New Hampshire had only 43 domestic infant adoptions placements for every 1,000 abortions.

From Consent versus Coercion: How SB335 Harms Adoption (a position paper about a New Hampshire bill that would allow adoptees access to their original birth certificates)

Right now the dominant voices in our cultural discussion of adoption are those like the NCFA who perpetuate stereotypes about the women who place their children and the women who receive them. It’s a conversation that tries to erase the presence of the women who give birth to those children by pushing t-shirts that equate adoption with pregnancy thereby obliterating the origins of adopted people. The way we look at adoption – especially domestic infant adoption – is a manifestation of our Madonna/whore complex where birth mothers are saintly sinners – angelic enough to give away the babies they aren’t good enough to keep.

We feminists need to start looking at adoption in new ways. We need to let the first mothers among us speak about their experiences past and present because their voices have been missing from our discussion. In the blogosphere we have feminist thinkers like FauxClaud, like Suz, like Jenna. (Suz and Claud right, blogging at the 2007 Ethics in Adoption conference). They can tell us how Juno will likely feel five years from placement, ten, twenty or more.

Adoption is a feminist issue because it is a reproductive rights issue. It is an issue about the value of women as mothers and who has “earned” the right to be one. It’s about how the states supports or does not support women who fall outside of the “good mother” rhetoric. It’s about privilege. It’s about class. 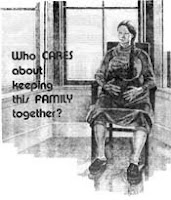 Unfortunately organized mainstream feminist talk about adoption hasn’t moved beyond the 1970s’s consumerist/choice nobody-held-a-gun-to-your-head blather that blames a specific group of de-priviledged women for their own de-priviledging–that privileged feminists have been all too happy exploit without a care to get their hooks into babies. But as Dawn pointed out, adoption IS about privilege. I would add that adoption is mainly a middle class issue as well, since today the rich and poor are seldom on the giving end of the “adoption option.” (Of course, that can always change with the economy)

There is little feminist critique of adoption outside of academia, and even there it is top-heavy with adopter discourse–some of it spot-on., and I don’t want to dimiss it. But, Feminist Bastard and Feminist First Mother voices are generally limited to blogs, forums, and obscure conference workshops. I don’t know why.

I’ve addressed adoption as a feminist issue here before in Open Letter to NOW: Is Maria Elena Salinas a Friend to Women , Surprise! No Reply from NOW! and probably some other entries I’ve forgotten about. Other Bastard Feminists who have written extensively on adoption are Baby Love Child and Janine Baer who published the pioneering Bastard Lesbian newsletter, Chain of Life. 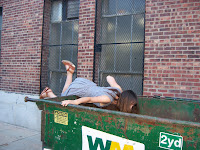 I wrote this in my Open Letter to NOW, and I think it’s worth repeating here now:

A few years ago I received an email from a member of New Jersey NOW who opposed the restoration of identity rights to adopted adults. She smacked my fingers and accused me of lacking “feminist credentials” and respect for women, especially “courageous” birthmothers.” I should shut up and be grateful that somebody adopted me and I wasn’t tossed in a dumpster.

11 Replies to “ADOPTION IS A FEMINIST ISSUE: DAWN FRIEDMAN TAKES ON THE NATIONAL COUNCIL FOR ADOPTION”