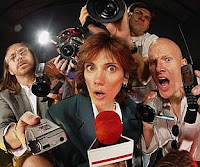 I’ve been working on a piece about the Grayson Wyrembek (Vaughn) case, and it’s gotten stalled. In the meantime, a lively discussion on the case developed on the Birth Mother-First Mother Forum. One of the topics up for discussion is media. I wrote a long reply, which got a little convoluted since I had to cut it up in sections to post. The post below is based on that reply, but longer and more detailed.

Media is all about perception.

I have mixed feelings about media involvement–ie Public Relations–in disputed adoption cases. Not too long ago, adoption was a private affair and those involved were loathe to expose this private affair for public scrutiny. It’s become apparent since Baby Jessica and Baby Dick, (not to mention the Internet), however, that adoption is a public event. Today, getting the media on “your side”when things go wrong is essential to the good public opinion people feel they need in these cases, despite the fact that it has nothing to do with legal outcomes. In a sane world PR would be considered a total waste of time and resources.
I don’t like to see little potential adoptees and those already adopted paraded around like trained monkeys by a bunch of entitled adults who are upset about not getting as much bang for their buck as they thought they’d have, such as the Vaughns are doing.
Since adoption is held in such high regard in this country, though, a case has to be framed by the media early as totally egregious to get the public on “your side.” Not only are cases such as Ben Wyrembek’s fight to keep his son a race to the courthouse, they are also a race to the newspaper office and the TV station.

Clearly paps Christy and Jason Vaughn played the media (or should I say jerked them off?) They were very good. I was impressed with how much angst, tears, pomposity, and self-righteousness they were able to wring out of their legal arguments. Funny how if we, that is, people who have actually experienced firsthand adoption corruption, greed, and lies, were to act like this, we’d be dismissed as ungrateful, bitter, over-emotional and in need of therapy. 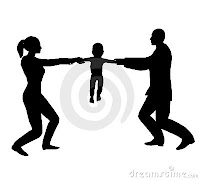 Without good media, though, you’re a cooked goose, at least as far as your self-esteem and the voyeuristic public are concerned. Ben Wyrembek is clearly in the right for retrieving Grayson from the adoption mill, yet he may as well be Osama bin Laden for all the clueless consumers of media hype care. Ben’s lack of media presence, (no doubt ordered by his lawyer) created a negative image. Instead of Ben the good father fighting for his son, we got Ben the bad guy, the sperm donor, the drive-by dad, the abuser, the abandoner, the baby stealer. If he really cared….

Not that any of this means anything in the real world of courts where decisions are made with facts and by law, not with TV tears and how many friends you have on Facebook. The Vaughns and their supporters don’t seem to grasp that we are a nation of laws, not popularity polls. They may feel good about themselves, but all their self-indulgence, candlelight vigils, and on-cue breast beating came up empty because the law isn’t Dr. Phil.

This is what’s really going on. We have a mutual aid society operating here; or in the parlance of my above metaphor: a circle jerk.

Litigants empower the media. The first one through the door gets the pretty frame and the positive press. In turn, the media, empowers the early litigant to be, in their own eyes and the eyes of the public, the hero of their own narrative. The public, in turn, gets to blow-out its grievances against the state, the courts, or whatever government bete noire they suffer from. The media coverage/ campaign acts as a safety valve for the aggreived litigants and public at large, marking out a starting point for future political action. Expect to see Baby Grayson bills introduced in the Ohio General Assembly and elsewhere next year to make it more difficult for dads to hold on to their parental rights. Expect to see the Vaughns show up, other children and church in tow with clips and videos in hand, to tell their sad tale of family demolition by judge. How they plan to explain that at least eight courts don’t “get” their case and how the Ohio Supreme Court doesn’t understand Ohio law is still a mystery.

If Ben Wyrembek had gone and presented his case to the media early on, there wouldn’t be over 7500 people on Facebook demanding his tar and feathering, calling him an abuser and drug addict, or sending the Vaughns bags of money and gifts to finance their pointless appeals. Of course, if he had, he’d be labeled a self-involved opportunist with an unnatural desire for getting his face on the 6 0’clock news–unlike the Vaughns.

Ben has gone by the book, legally and morally. He took the high road–the old road of private space and family privacy. The Vaughns took the low road–public space and child exploitation–re-creating themselves as victims of an “unjust system” when they were, in fact, victimizing Ben and Grayson, and trying to take down ethical adoption to boot.

I can’t decide if Ben handled this case right in terms of media. The “nice” side of me says that kids are not dogs and ponies. But I also don’t like to see good guys like Ben Wyrembek take a public beating from the fists of an adoption-ignorant public. Now, when adoption has become everybody’s business right out the gate Ben could just have told his story to the press without holding up Grayson as a prop. Preemptively, through his own dignity and reticence, he could have cut Vaughns off at the knees if they tried to turn Grayson into a household name. Maybe. What do you think?

Things worked out well (so far) for Ben and Grayson. But what about the next guy? It’s the squeaky wheel that gets prime time. As long as the public demands adoption theatre, the more parents who try to get their kids back will be publicly vilified. Especially dads. The time is not far off, or perhaps it’s already here, when adoption litigants will need to hire media consultants to get them through the day. It’s therapeutic. It’s about feeling in control, when the fact is, nobody is in control but the courts.

Grayson has been returned to Ben, and there seems to be little chance that he’ll be sent back to the Vaughns. The couple, demanding more than their 15 minutes, has reportedly retained Atlanta “superlawyer” Lin Wood to represent them in another appeal. Or maybe they plan to continue suing judges or child welfare specialists who refused to play their game. Wood is no stranger to the TV cameras. He’s represented John and Patsy Ramsay, Richard Jewell, Howard K. Stern, the estate of Martin Luther King, Jr. and a lot of other high profilers.
In the short run, I can’t figure out what the Vaughns hope to get from this public hissy fit. Any judge who is influenced by public opinion would step down or be thrown out. Yet the Vaughns and plenty of other adoption-at-any-cost pitchforkers think that a public display of muscle– “education” and outrage–will get the couple the kid they deserve despite law and ethics to the contrary. In the long-run, though, it’s clear that the adoption industry–particiularly adoption lawyers –will attempt to exploit the “Grayson case” to jam through laws that further divest fathers of their rights and their children. If the Vaughns can’t have Grayson, they’ll make sure other dads don’t get their kids.
For those interested in the “Grayson Case” retired paralegal David Houston has been following it closely. You can find a timeline of events and a large archive of legal documents on his webpage here. These papers include the Vaughns various suits against judges they don’t like. You’ll need Adobe Reader
NOTE: I have decided not to post Grayson’s picture here, though it has appeared all over the blogosphere and media. I think it behooves us as adopted adults to protect his privacy in what little way we can. He is too young to have control over anything.

10 Replies to “Adoption as a Public Event: Media Perception and the Grayson Wyrembek Case”