Rep, Richard Stark (D-104) recently introduced HB 357 in the Florida House. Senate Companion SB 576 was introduced by Dennis Baxley (R-12) Last week HB 357 was referred to the House Health Quality Subcommittee, Health Appropriations Committee, and the Health and Human Services Committee. The Senate bill has not yet been referred to committee.

HB 357/SB576 is promoted as an “adoptee rights” bill—one that will restore the right of OBC access to Florida adoptees. Do not be fooled! The confusing and ambiguous bill discriminates against all Florida adoptees by maintaining the status quo for some and placing undue and unreasonable restrictions on others.

(1) Pre-July 1, 1977s adoptions: Currently, in theory, Florida adoptees whose adoptions were finalized before June 30, 1977 have unrestricted access to their OBC, a right they have held for decades. No specific legislation, however, was enacted to authorize that release. As a result, due to misunderstanding and misapplication of law, some pre-1977s adoptees receive their OBCs, but many others are routinely denied access. In some cases, the Department of Health has refused to comply, even if with lawfully issued court order has been issued, and adoptees have been forced to sue the state for what is rightfully theirs. HB357/SB576 does not cover these circumstances. It appears, in fact, that under HB357/SB576 pre-1977 OBCs would remain held hostage to current ambiguous and confusing Florida release practice and the whim of bureaucrats. They would receive no relief. That is, it is likely that the current pre-1977 system and its misuse, will remain in place.

(3) July 1, 2018-beyond adoptions:  OBCs would be released to adoptees upon request, with no restriction, at the age of 18.
Adoptee rights/equality and adoption reform organizations overwhelmingly oppose HB357/SB576. Today these organizations, including Bastard Nation, the Adoptee Rights Law Center, the American Adoption Congress. the Donaldson Adoption Institute and numerous international and state organizations have released a joint letter addressed to Rep. Stark, Sen Baxley and co-sponsors in both houses requesting that the bill be withdrawn and that a genuine adoptee rights bill replace it. The letter has also been sent to the Health Quality Subcommittee asking members to oppose the bill.

We ask you today to join us in calling for HB357/SB576 to be withdrawn or killed before it gets out of the gate.

Below is a template for letters. We suggest, however, that you personalize your letters.

I am writing today to call on Rep. Richard Stark to withdraw HB 357/SB576 and for members of the Health Quality Subcommittee to oppose the bill.

HB357/SB576 is not an adoptee rights bill. It will not restore to all Florida adoptees’ their right to obtain their original birth certificates at age of majority. Instead, it creates a confusing and random tiered system of access that essentially imposes a 40 year waiting period on adoptees in the middle tier, while leaving unchanged the current practice of routinely denying access to OBCs to most adoptees whose adoptions were finalized before July 1, 1977. While it recognizes what is already law; and should be the practice in Florida with respect to those pre-July 1977 adoptees, it does so without any real clarity, enforcement or even any specific access provision or guidelines. It gives those adopted as of July 2018 and beyond unrestricted access to their original birth certificates at age 18. Those, however, who have the misfortune of falling in the middle tier either have to wait 40 years after their adoption, know the name of a birthparent or know that their birthparent is deceased or is “presumed to be deceased”–which is so vague that it will have to be litigated or regulated by rule.

Best practice standards of adoption demand openness and transparency, which includes the right of adult adoptees to have unrestricted access to their own original birth certificates without restriction or government interference. Please join adoptees in making that happen. Please oppose HB357/SB576.

In case of bounces, go directly to Representative’s or Senator’s personal page and click on direct link or template. 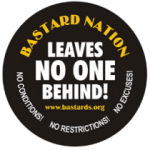 Please sign on to  Bastard Nation’s national and state advocacy efforts, It will only take 30 seconds and it could change your life–and the lives of adoptees in the US and around the world.!