The Examiner has a 4-part interview with Eileen McQuade, president of the American Adoption Congress. Part 3 is dedicated to the AAC’s policy on records access. Eileen talks out of both sides of her mouth:

The AAC believes that the decision to compromise must be made at the state level, depending on the assessment of local advocacy groups.

I’ve been meaning to write a response to a statement along the same lines that Eileen made in the last issue of the AAC newsletter, The Decree. I still intend to, but this Examiner statement needs to be answered now.

I sent off a response to the Examiner, but (I think) due to space limitations only the first four paragraphs appear. Here is my comment in full with some re-writing and a one-paragraph addition towards the end. 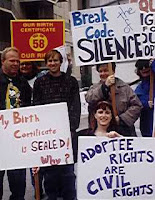 While the AAC in theory “does not believe that birth parents have the right to veto access to the birth certificate” in practice it supports and promotes legislation, inside and outside its organization, that includes restrictions on access such as disclosure vetoes (DV) white-outs, and prospective measures that leave large groups of people behind.

The AAC opposed Bastard Nation’s successful ballot initiative in Oregon saying we would turn the clock back 20 years. Yet in the 20 years they had been in operation at that time, they and their friends had not gotten passed one single unrestricted access bill, though they’d gotten discriminatory restricted bills in place which continue to muck up the civil rights for the adopted in those states making our job much more difficult.

Not one state–ever– has fixed any compromised law. Once the state has made a DV agreement with a parent, it cannot unilaterally change the law and lift the DV. Even if a DV-state passes a bill retroactively opening all records, DVs on file would remain valid, leaving a blacklist of adoptees that cannot get their obcs unless their individual DV is rescinded—even by court order.

The ACC, no matter what its stated political view may be, is at heart reunionist. Its records agenda is based in desire, not rights. Bastard Nation certainly does not oppose search/reunion, but that’s not the issue. The issue is rights.

All arguments for obc access must flow from the presumed right of all adults to unrestricted access and possession of their original birth certificates, not just a majority class. Otherwise the right to one’s birth certificate is not a right but simply a favor the state grants to some, a proposition which we doubt courts want to consider. The real issue, then, moves beyond “reunion” and the personal to the public and the political: who owns your identity: you or the state? What interest does the state have in keeping your birth certificates sealed? What is adoptees’ relationship to the state?

These are questions the AAC and other reunion-based groups neither address nor seem to take seriously. 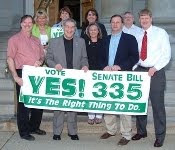 Bastard Nation has drawn the winnable blueprint for change. Before BN developed its successful no-compromise strategies, only two states in the country allowed obc access to adoptees, Kansas and Alaska, both of which had never sealed records. Unrestricted access is now the law in four new states. Oregon and Alabama were direct BN projects. In New Hampshire we worked with a loose coalition of organizations and individuals, including AAC members. (right) Our own Janet Allen, a member of the NH House, worked tirelessly for passage with sponsor Sen. Lou D’Allesandro. We were not involved in Maine, but the folks there clearly followed BN’s no-compromise principles. Without BN’s clear vision, courage and core beliefs, none of those states would be open today. 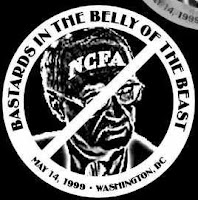 Reformists can’t be as dumb as the box of rocks they pretend to be. Yet, compromise on access, despite all proof to the contrary, remains their strategy of choice and ease. Reformists continue to take the same old tired path of self-defeatism for reasons that I can’t even begin to comprehend. (NOTE: In 1999 Bastard Nation staged a protest at the old NCFA office in Washington, DC. In the Belly of the Beast was held during the AAC annual conference in a nearby Virginia suburb. When a couple of AAC board members exhibited an interest in attending the protest, AAC president Jane Nast not only forbade their attendance but called a mandatory board meeting for the same day and time to guarantee obedience to her and their absence from our ranks.)

The AAC has done some excellent work in other areas of adoption reform, but imo, they are the chief impediment to the restoration of our rights. Our natural opposition operates in a predictable manner: NCFA, ACLU, Planned Parenthood, “right to life” organizations, the Catholic Bishops. No matter what is proposed–clean or compromised–they don’t budge their opposition. Reformists, however, go to great lengths to explain how they “believe” in clean bills. At the slightest sign of opposition they then inexplicably cast their principles before swine, hoping if they toss enough to them, they might get something. This waffling reeks of indecision, insecurity, and amateurism. Moreoever, the AAC by leaving the decision to compromise up to local groups indicates a lack of leadership and exhibits ideological weakness. Wag the dog. Wishy-washyness does not command the respect of NCFA et al and certainly not Bastard Nation. Why should it? They compromise clean bills. They promote discriminatory bills. They seldom pull a bill gone bad. Anything is better than nothing. “Baby steps” is better than nothing. The thing is, we aren’t babies.

7 Replies to “THE AAC AND ADOPTEE RIGHTS: A REPLY TO THE EXAMINER”