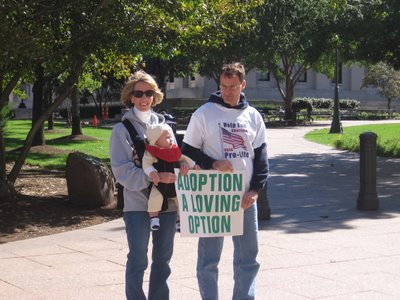 For over 2 years Bastardette, in real life, has documented and written about Biblical American activities in Central Ohio. Some articles have been published in the Columbus Free Press, and everything has been posted on my blog, Theoconia: A Central Ohio Theocon Report.

BA’s focus, and consequently mine, has been on abortion, but other “interests” are queers, Terry Schiavo, John Kerry, the Ten Commandments, Ohio State Universitiy, and of course Ken I-stole-the-2004-election-for-Bush Blackwell with his gang of
“values voters” and Patriot Pastors led by Rod Parsley and Russell Johnson.

I try to remain neutral when I’m “working,” but early in my documentarian career I got into a scream fest with one of the local anti-aborts who takes the smallest questioning of his belief system as a Satanic attack on his personal person. One Saturday morning, standing across the street from a clinic, this person, who, I’ll call Bob, called me a liar when I told him there are women who consider adoption worse than abortion, did not feel duty-bound to breed for the desperate and infertile (no matter how “Christian” nice, and “needy” they are), regretted their children’s surrenders, and were, in fact, (gasp!) were opposed to adoption. Bob’s irritation with this unpleasant conversation escalated quickly into a red-faced diatribe where he proclaimed that not only was I a liar but women who “claimed” to oppose adoption were liars, too. Women, according to Bob’s POV, are born to breed–and love to do it–if not for themselves for somebody else. Anyone who turns down a rent-a-womb temp job is way out of synch with Jesus.

Bob is a loud exception. The less angry clinic habitués simply want to adopt your baby. And YOU, too, if that’s what it takes to keep you out of the “aboritorium.” So rest assured, moms. If you get yourself in trouble again, you can easily find a new set of parents in Licking or Coshocton Counties thrilled to take you in, erase your embarassment and identity, and give you and your baby a new name and a…well clean slate. If life at Turkey Foot Rock and Pin Feather Ridge doesn’t sound real engaging…well get used to it. They’got cable–and it’s for your own good.

Since hanging out with “my guys” (and the majority of them are men) I’ve taken 1000-1500 pictures at events. My guys favor marching on the sidewalk with bloody dismembered fetus–baybee blender bits– posters but for variety’sake, usually one or two “adoption option” signs show up in the mix accompanied with the soulful plea ‘I’ll adopt your baby” I’m the anti-abort’s adoption poster girl,and they are grateful that I wasn’t dumpsterized, so I always take a couple shots of the adoption guys to thank them for retroactively saving me. What else are adoptees good for? Most of my pictures are hard copy and not readily transferable to my comptuer at this time. But…

since Bastardette’s first and foremost duty is to irritate and annoy, I’m posting a few of the latest shots. I’m ID’ing them, but you may want to make your own captions.

You can read Life Chain: The Kool-Aid Test about the Life Chain event where the first 3 pictures were taken, here. 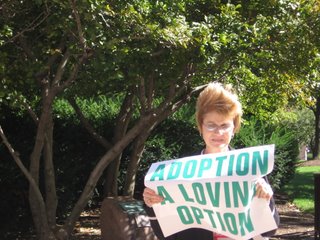 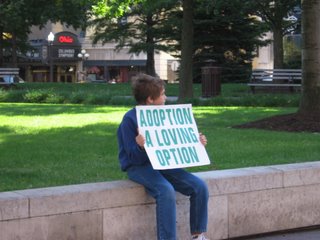 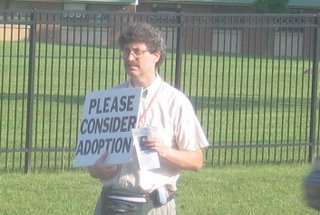 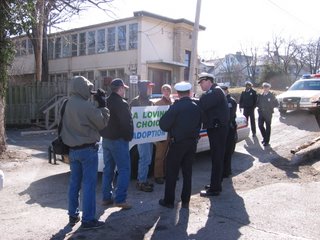 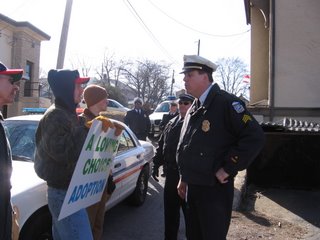 17 Replies to “SIGNS OF THE TIMES: I’LL ADOPT YOUR BABY!”