It never ceases and amaze me how creative deformers are.

How many ways can a birth certificate be folded, spindled, and mutilated, run through the shredder, and the detritus be considered “rights”?

Yesterday, the Rhode Island Judiciary Committee passed H7877 , a twisted sister “adoptee rights” bill. The bill includes a disclosure veto. But just not any disclosure veto. This is a very special veto: 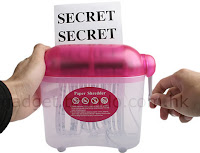 That is, not only can your parent(s) file a disclosure veto and hold your birth certificate hostage, but so can relatives you’ve probably never even heard of. Even the very people who might have forced you into the adoption mill. And…these mystery relatives can speak for the dead, too! What’s to stop strangers, in fact, from filing a veto without even telling Mom or Dad about you or the veto. How will this veto be administered? Is it a passive veto? Or does the state track down mom, dad, grandparents, aunts, uncles to chit-chat about your worthiness quotient?

Do these deformers not realize how dangerous this is?

For years real bastard advocates have been fighting the deformer-created “special rights” disclosure veto doctrine they love more than their own rights–or rather YOUR rights. Now a new generation of deformers–some of whom have actually worked on and helped win clean bills in New Hampshire and Maine and know the sweet smell of success– for some inexplicable reason want to expand that “special right” to collateral relatives. Once that happens, Rhode Island will never reach back into that black hole and pick up is left behinds.

Maybe there’s some grand strategy that the rest of us are just too plumb dumb to see. Like that grand strategy in California that would have amended their piece-a-crap on the floor?

Sometimes something is not better than nothing.

A Later Thought: What’s wrong with asking for what you want and sticking with it? Do these people go shopping for a 2010 BMW and walk out of the dealership, all too happy with a 1987 Yugo?

10 Replies to “RHODE ISLAND: EXPANDING THE THE VETO”