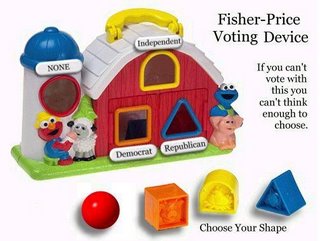 Here’s some news out of the midterm-elections on people we either love or hate who are involved in our adoption affairs. There are no doubt many others to add, but these are the campaigns I followed.

MASSACHUSETTS
DEVAL PATRICK (Democrat). Until a few days ago, Bastardette had paid little attention to the Massachusetts governor’s race, noting only that the odious Republican Kerry Healy was hoping to succeed her boss Mitt Romney who for some reason thinks he can be the next President of the United States. Then the Morriseys rushed off a letter to MetroWest Daily gnashing that if Healy’s opponent Deval (or is that Devil?) Patrick were elected, he’d “extinguish” the state’s “Baby Safe Haven” law, which they had so lovingly, just a couple years ago, jammed down the throats of the public. Now, I have no intimate knowledge of Mr. Patrick’s views on safe havens, but if he upsets the Morriseys then that’s good enough for me. Obviously my blog “Vote for “Deval Patrick and Baybeees Will Die” (see below and also read the attached comments) swung the election. Congratulations, Deval! We’ll talk later!

NEW HAMPSHIRE
LOU D’ALLESANDRO (Democrat) was elected to his 5th term in the NH Senate. Sen. D was the sponsor and shepherd of SB 335 which restored the right of all New Hampshire adopees to access their birth certificates. Since enactment he has continued to support records access bills in other states and testified in person throughout New England on behalf of adoptee civil rights. He is the adoptive father of two adults.

JANET ALLEN (Republican) Bastard Nation is happy to report that our own Janet Allen survivied the bloodbath and was elected to a third term in the NH House. Janet is the legislative consultant to the Bastard Nation Executive Commitee. She was hugely instrumental in the passage of SB 335 and continues to work with legislators in other states to pass similar legislation. Janet is an adopted adult, although one unnamed legislator and opponent of adoptee civil rights once told her that due to her adopted status she would remain a child forever.

MIKE WHALLEY (Republican) Another survivor! As Deputy Speaker of the House, Mike was a powerful supporter of HB 335 and through his good services pushed the bill to passage. Mike thinks that adoptees are like anyone else. He is not adopted.

In Bastard Nation there are no Democrats or Republicans. Only Bastards. Lou, Janet, and Mike are a perfect example of bi-partisan support for adoptee rights and records access. Although Janet and Mike are now the minority party, we are assured that they will continue to look out for adoptee interests in New Hampshire. And, of course, Sen. D will be there for us. Congratulations to all!

THE AXIS OF EVIL

ALABAMA
JOHN TYSON (Democrat) The Mobile County Prosecutor and Godfather of safe haven laws was defeated in the state’s attorney general race by current AG Troy King. Tyson implemented the first safe haven program in the US, A Secret Safe Place for Newborns. I met Tyson in Memphis a few years ago. He’s got brass balls. He’s tough, but no goofus unlike a few other SH proponents.

IN A CLASS BY HERSELF 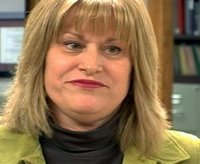 SOUTH DAKOTA
LESLEE UNRUH (Wingnut). Leslee just can’t take no for an answer. As most people know, her pet measure went down by about 56%. Deaf to the people’s voice, she continues to bellow. Here’s a press release excerpt from WDC MEDIA NEWS Christian News and Media Agency in which Unruh & Co. blames everybody but themselves and their stupid referendum for their defeat. I guess we don’t have to worry about the Unruh Abduction Agency re-opening in South Dakota in the near future. But be vigilant!

“I believe there were a number of things working against us,” said campaign manager Leslee Unruh. “Historically, the voters go against the legislature on 80 percent of referendum issues.”

Unruh said that in addition to history not being on their side with a referred law, there were some problems within the coalition in staying on message, with some well-meaning pro-life groups and individuals using methods and tactics that may have distorted the message that abortion not only hurts the unborn, but is devastating to women as well.

The legislation suffered, too, from a dearth of leadership support within political circles. While South Dakota’s Democratic Congresswoman Stephanie Herseth and Senator Tim Johnson came out strongly against Referred Law 6, Senator John Thune, a pro-life Republican, was largely silent. Governor Mike Rounds, also a pro-life Republican, signed the bill after it passed the legislature, but gave only lukewarm support of the measure once a successful petition drive referred it to a vote of the people. 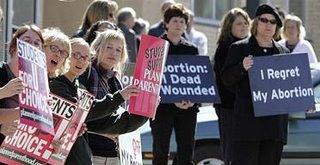 There was also a lot of nastiness from opponents of the ban, coming in the form of threats of violence to Unruh, and the vandalism and theft of hundreds of campaign signs throughout the state which may have served to distract those involved in the campaign and those the campaign was trying to reach.

Facts are still being gathered, but Unruh said that in the final days of the campaign, many people received phone calls from people claiming to be from VoteYesForLife.com, but the calls urged voters to vote “no” on Referred Law 6. Unruh said she had received one of these calls herself. The investigation into this development is ongoing, she said. Although some effort was made by the campaign to point out that one of the key legitimate roles of government is to protect the innocent, it was not heard often, or until near the end of the campaign. Many Referred Law 6 supporters, including VoteYesForLife.com board member Stacey Wollman, believe the strong sentiment in western South Dakota against what was seen by some as “government intrusion” hindered the effectiveness of the campaign