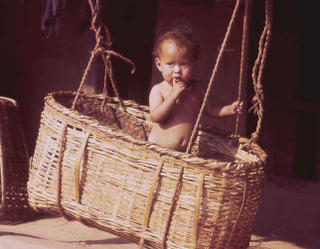 Domestic tranquility continues to elude Bastardette. Did my parents ever have these problems? I think not! But then they were responsible adults.

For the third year now, the Illinois-based Save Abandoned Babies Foundation has staged this laudatory dollar harvesting event where “saved” babies are paraded around like a new pair of Sunday shoes and their anonymous,invisible mothers who “legally abandoned” them through the state’s Abandoned Newborn Infant Protection Act, are back-patted by police, politicians, professional do-gooders, and adopters. Words such as “brave,” “courageous,” “loving,” and “responsible” get thrown at these unknown women faster than a sidewalk hooker works a traffic jam. It is assumed that if these unfortunate mothers didn’t possess one or more of those sterling Republican qualities they’d drown, smother, stab, shoot, bash, or garrot their “inconvenient” newborns. The term “adoption plan” never enters the heads of the bay-bee savers. Ditto the subversive idea that with help “desperate mothers” (the favored descriptor) could keep their babies if they wanted to instead of depending on the kindness of the nearest cop shop. In the weird Manachaen world view of the Safe Haveners, where every female is a potential baby killer, unplanned baby = dumpster baby.

This year’s event was staged at the headquarter’s of the Chicago PD and included the improbably named Chicago Fire Commissioner Cortez Trotter, Director of the Illinois Department of Social Services Bryan Samuels, and, of course, SABF founder Dawn Geras and her band of merry bay-bee savers.

Adding to the ick factor, two Safe Haven “beneficiaries” were (pardon me, Cortez) trotted out for TV cameras to illustrate that “Safe Havens work.” Making his third appearance in as many years was a Baby Matthew, the first baby “saved” from the great Dumpser Toss.

Of course, the big problem with this scenario (caveat: since Safe Havens are a big fat secret it is impossible to know exactly what is going on–and it’s none of our business anyway), is that according to newspaper accounts at the time of his “relinquishment,” Baby Matthew wasn’t saved from anything except a traditional, ethical relinquishment.

Specifically, according to the April 11, 2002 Rockford Star-Register (now in the paper’s paid archives), the birth mother had looked into open adoption–hardly the act of a potential murderer– and changed her mind. Was she informed about traditional confidential adoption at the hospital? We don’t know. With the no-questions policy, we doubt it. Trivializing the life-long consequences of being shredded by the mighty Safe Haven Harvester, DCFS attorney and resident Grundy, Cheryl Cesario, treated the “anonymous relinquishment” as just another consumer option. “It was a perfect fit for this woman,” she told the press shortly after Baby Matt was “saved.” Bastardette believes she hears Clara Bow’s Betty Lou shouting from the great beyond: “If women like you would stay home and have babies of your own, we’d all be better off!”

Baby Matthew was joined by Baby Angel, turned over to police by her mother after being born in an abandoned building.

We don’t question the sincerity of these sentiments. We do question, however, the lack of parental common sense which permitted these children to be exploited by the baby dump industry whose leaders are not only openly hostile to the identity and civil rights of adult adoptees but proudly claim Safe Havens as the Big Bertha in their personal war against adult adoptees.

Basket Baby! Basket Baby! As adult adoptees, many of us are familiar with the schoolyard taunts of past years when our adoptive status was exposed–often by naivete or good intent. While bastards are no longer much stigmatized in the US except by cultic Christianity, adoptees are, especially those who are dumped with no blame, no shame, no name. We would hope that with all of the talk of “privacy” surrounding the Safe Haven movement, that a modicum of privacy–and dignity–would be extended to these little ones who have been separated anonymously and carelessly from their biological families. Unfortunately, the political lobbyists who pimp Safe Havens have no compunction about pimping their catches as well.

Some day these children will be too old to serve as props. They won’t be cute and photogenic, and they will have questions that, thanks to Safe Haven, cannot be answered. What will the pimps do then? Tell them as they tell us, “shut up and be grateful!”

We’re here for you Matthew and Angel and all of the others squished through the baby spammer. We won’t forget you. And we continue to fight for you. We leave no one behind.