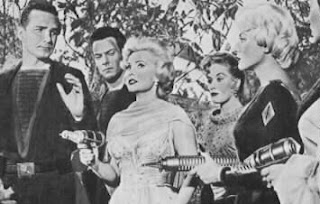 Poor Diablo Cody just can’t get a break! That old bat shit Phyllis Schlafly hates Juno as much as adoptees and first parents do. Not for the same reasons, of course. Schlafly claims the yukky film is a playbook for penknife wielding feminist castrators in their battle to carve out a happy-ever-after male-free utopia:

The theme of this movie isn’t love, romance, or respect for life, but the triumph of feminist ideology, i.e., the irrelevancy of men, especially fathers. The men in the movie are likable, but marginalized; beyond their sperms and their paychecks, they have no value worth considering, and can be thrown overboard by independent women and girls.

The movie portrays the adoption as a good outcome, but it is not. The baby will grow up without a real or even a surrogate father, and Paulie, the father, is not asked to approve the adoption or to sign the adoption papers.

Some day the child will ask why he does not have a father. The truthful answer is that feminism has made fatherlessness acceptable in our society. 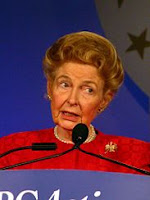 But don’t get too excited. Phyl the Pill, founder and president of The Eagle Forum, is the grande hag of the American Right. (Remember A Choice Not an Echo? The destruction of the ERA?) I saw her work her stuff at the 2002 Christian Coalition Road to Victory conference at the Washington Convention Center. She looked like she’d been made-up by an undertaker. The Tennessee Eagle Forum joined The National Council for Adoption, the Tennessee Christian Coalition, The Family Research Council, and other odious anti-adoptee organizations and individuals as an amicus to overturn Tennessee’s semi-open records law (Doe v Sundquist). They lost. She’s as much a friend of first parents (ie fornicators) and adoptees as NCFA.

4 Replies to “PHYLLIS SCHLAFLY vs DIABLO CODY: JUNO IS A FEMINIST PLAYBOOK”