Save the date!
Distribute Freely!
The great bastard bard Mary Gauthier will be performing here in Columbus on May 18. 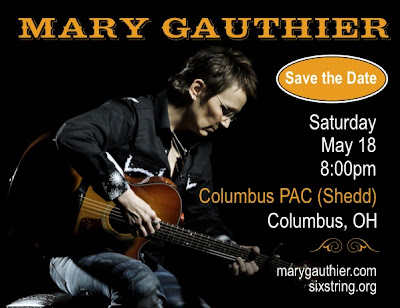 I first ran into Mary  over 10 years ago on WCBE.  I’d never heard of her.  I don’t remember the name of the song that was played and the word “adoption” wasn’t mentioned once. But Wowza!   I shouted  “that’s about being adopted.” It was.  And I googled her. Since then I’ve been a big fan.  Her May 2010 CD The Foundling, is a tour d’ force of her own adoption experience:

The  songs (on The Foundling) tell the story of a kid abandoned at birth who spent a year in an orphanage and was adopted, who ran way from the adopted home and ended up in show business, who searched for birth parents late in life and found one and was rejected, and who came through the other side of all of this still believing in love

–but speaks to us all no matter what our experience.

It was named 3rd top CD of the year by the LA Times. 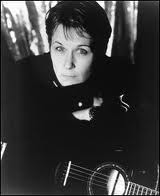 My personal favorites are the title cut and “Blood is Blood”.  What bastard can’t  appreciate the absurdity of: adoptaspeak:

An excellent interview with Mary was published in Pennyblack Music.com.

These brave souls are working towards one of the last to be recognized civil rights issues – the right for human beings to know their origins, for all adoptees to know where they came from, to have unrestrained access the their own birth certificates. As of now, we do not have that right. In all but 6 states, adoptees birth records are sealed shut by the state, and upon adoption birth certificates are re-issued…. with adoptive parents names on them.

Of course Mary is about  and writes about much more than adoption.  She’s a story teller with a genuine voice, no matter what he subject. Her work is admired by Bob Dylan and Tom Waits:  An earlier (2007) CD, Between Daylight and Dark was universally praised:

“If she keeps this up, one day she may assume the mantle of Johnny Cash,” raved the New York Daily News; while the Boston Globe praised Mary’s “particular blend of toughness and vulnerability that puts her in a league with Bruce Springsteen and Steve Earle.