Today the adoption industry  launches the 2011 edition of  National Adoption Awareness Month. (NAAM) Bastardette knows you’ve been looking forward to this great event as much as she has.

Coincidentally,  today also marks the first day of November NaBloPoMo . No, that’s not an unspeakable sex act.  It’s the November edition of National Blog  Posting Month, a blog ritual for over-zealous bloggers  who promise to blog every day on a designated  topic each month.  Topics that only the most abstract students of 19th century British literature can appreciate fully, such as “return” and “between,”  November, however is  the open month, which means we can choose our own bloviation.  My subject, naturally is adoption.

I successfully completed the 2009 November NaBloPoMo none the worse for wear but full of wonderment that I succeeded. . You’d be surprised, though,  at the topics that  land in your brain when you are desperate to cross the finish line. 2010  November NaBloPoMo was more difficult.. I finished exhausted, but finished. This year, due to my summer hiatus I feel up to it–so far. There is so much to write about that surely I can fill up 30 days as easily as filling up water balloon and dropping it on the head of an adoptacrat below.  I’ve got several topics lined up so far.  It’s just a matter of time and articulation.

Today I had planned to comment on suggested NAAM activities listed on the web, but decided commentary would be anti-climatic, so I’ll post some links  for your enjoyment instead..  adoption.com furnishes us with a calendar of daily celebratory events:  a dinner table discussion of the history of NAAM; cooking  with child (adoptees beware!); helping your library set up an adoption book display,  surprising your child with a few Chinese or Russian words; creating an adoption family tradition ( GOTCHA?)!;  and adoption stories. (aren’t they all?)  My favorite is the activity for November 28:  spend some time at a maternity home. Is that an order? My mother been there done that.  Look what she got out of it.  Or didn’t.

Self proclaimed adoption expert and gadfly Mardie Cardwell suggests we

***NATIONAL ADOPTION MONTH SPECIAL FOR NEW LBAS CLIENTS****
Take 10% OFF Adoption Profile Design, 10% OFF Adoption Website Design OR 10% OFF Printing of Adoption Profile Books, Adoption Pass Along Cards, or Adoption Brochures. *New Clients Only – Contract must be received by November 11, 2011
Of course. this doesn’t’ even begin to cover the hundreds of puffy national and local news stories on the blessings of adoption;  hardluck tales of paps, adopters, and orphans; interviews with adoptacrats (special emphasis on Christocrat adoptacrats); sappy  reunion accounts that not once mention that states continue to refuse to restore  the right of all adoptees to access their birth certificates  without exception, a right these same states once upheld without exception.
NAAM is also a good time for the professional adoption class:  the Evan B Donaldson Adoption Institute, The National Council for Adoption, JCICS, and local agencies to beg poor so they can continue to provide “services” to their clients..  No adoptees need apply. 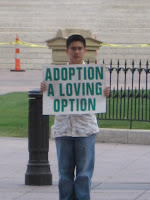 NAAM also brings lifers out en force  pounding their hammers on the heads of adoptees who exhibit insufficient gratitude for all the work the fetus savers have done in  “our” sacred name. Right to Life,  Students for Life, Feminists for Life, Democrats for Life, Priests for Life,  Life Issues, Institute, the American Life League, Human Life International.will howl incessantly on how adoption saves fetuses baybees for adoption-the-loving-option  (which it doesn’t)–and btw, send us money.   By publicly celebrating the spurious”life saving” elements  of adoption, lifers and their ilk can hide their aggressive hatred of Class Bastard and pantless parents who fail to appreciate their efforts and would like more than anything for them to go back to their pews and mind their own business.


So welcome to National Adoption Awareness Month and November NaBloPoMo.  Bastardette won’t shut up.  We hope you won’t either.