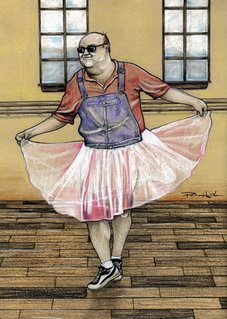 The Deformers in New Jersey have fashioned a “Mother, May I?” amendment allowing birthmothers 12 months following passage of the bill in which to file an affidavit of nondisclosure. This means that if a birth mother signs a statement saying she doesn’t want her identity known to her child of adoption, then that adoptee doesn’t get his or her birth certificate- possibly forever.

New Jersey is actually handing over its constitutional responsibility of issuing birth certificates to birth mothers who claim they want their privacy. These are the same birth mothers, I might add, who legally and irrevocably gave up all legal rights to their children at the time of the relinquishment. 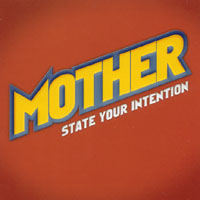 THE MOMMIE/STATE OF THINGS
Tagging S1087 as a “Mother May I? bill” is a stroke of semantic genius. The phrase strips away the progressive façade of compromising adoption deform and exposes its underpinnings of self-defeat and internalized unworthiness.

Mother May I? bills accept the false claim that parents have the right to dictate the terms of identity retrieval to their adult children who they signed (willingly or not) into the adoption mill. These bills codify some weird recreation of a child asking Mommie for permission for the trivial: a Toostsie Pop. A pair of Hello Kitty panties. I’m not worthy, but if you’d be so kind…Mother may I?

Not satisfied with simply sealing parental information from adopted persons, Mommie/State, in collusion with self-deprecating Deformers in New Jersey, propose a bigger insult than the current law (if that is possible!): the release of original birth certificates to all adoptees, but with the identifying information deleted if a parent objects to being outted to her or his own adult child. And to top it off, if this bill passes, the Mommie/State wants to run an ad campaign to warn natural parents about the threat the law poses to their “right to privacy” so reluctant parents will have plenty of time to access their own special right to hide inside the WhiteOut bottle. Boo!

The keystone of adoptee rights has always been access and identity for all adopted persons who want it–without prejudice– as a right, not a favor.

I know that many Jersey Deformers understand this principle. They have long held and still claim to hold the rights argument. Yet after 25 years of struggle, they now disown that principle out of expediency They will take what they can get–a soppy bill that solidifies the state view that adopted persons are different from the not-adopted. Adoptees, as the product of unbridled lust and de facto guilt, require special state supervision and monitoring simply because they exist. Something-is-better-than-nothing-at-this-late-date Deformers embrace the infantilizing S1087, which segregates adoptees into legal classes, treats women as incapable of personal responsibility and in need of state protection, and thrusts the long fingers of the state into the personal business of families and individuals. They call this progress. Or maybe they’re just tired. 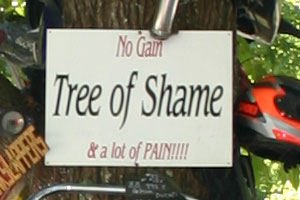 THE TREE OF SHAME
Adoptee identity rights is not about reunion, though reunion can be a side effect of access. Adoptee identity rights is not about therapy, though some people are bound to feel better when they hold their own documents. Adoptee identity rights is about overthrowing a corrupt state system that seizes our most precious possession: our names, our histories, our heritages, our genealogical contexts–our identities. No amount of adoptee begging and compromise will fix that rotten system. By ignoring the real issue and framing the right to identity in terms a Mother May I? game, where adoptees remain scary and scared, compliant and obedient to the whim of state authority and a bogus “right to privacy” from one’s own offspring, we all lose. Is it any wonder that politicians continue to slam the file cabinet on our fingers? What’s to respect?

Bastardette is sad for the adopted people of New Jersey. And she is sad for those who push S1087 knowing that the bill betrays the adoptee class that will reap the rotten fruit fallen from the New Jersey Tree of Shame, not just in Jersey but in the remainder of closeted states. Ironically, the New Jersey folks have named S1087 the Adoptees’ Birthright Bill, yet they have sold the birthright of all for a favor to some.

Read Grannie Annie. And pull on your boots.

40 Replies to “MOTHER MAY I? GRANNIE ANNIE NAILS IT!”