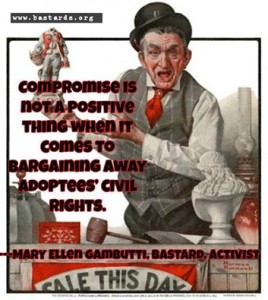 My silences had not protected me. Your silence will not protect you, Audre Lourde

Missouri Adoptee Rights Movement (MARM), continues to stonewall its members, friends, and adoptee rights activists in general on the status of HB  1599,  you, know, the “beautiful thing” bill that if passed would strip Missouri  adoptees, in the name of “adoptee rights,” of even more rights.  As I asked in the lead-up to this debacle, what would Orwell do?

After Bastard Nation partner Missouri Open (MO) published its preliminary report on the Wednesday April 13, 2016 Seniors, Families and Children committee decision to gut more of the already gutted-but-once-clean bill with adoption agency sponsored amendments, MARM remained silent. Although MO posted its statement on the amendments on April 14, 2015 at 12:08 AM  MARM did not post theirs until nearly 12 hours later (11:24 AM), and then with a big back pat and a horn toot:

Per Representative Phillips “My HB 1599, aka; the Mo Adoptee Rights Act passed unanimously out of the Senate Committee on Seniors, Families and Children today by a vote of 7-0! Next step is making it onto the Senate floor for debate / vote. We are getting closer and closer! Thank you Sen David Sater and members of the Committee!”

The statement was met with applause by people clearly unaware of the new amendments or who didn’t care.

When a few inquiring minds  asked about the amendments or remarked about the deform,  MARMers responded  by blaming critics of deform–aka Bastard Nation and Missouri Open–for deform:

Konni Lane from Missouri Open asked:  What about the more restrictive Senate Committee Substitute? The one that makes the disclosure veto permanent, even after death of birth parents and gives agencies 16 months to contact birth parents to allow them to opt in rather than 9 months for birth parents to opt out?

Missouri Adoptee Rights Movement:  Konni Hall if people will stop attacking certain Senators then maybe those senators won’t be so insistent on adding more restrictions to the bill. Please remember, the bill still has not gone through perfection….

Missouri Adoptee Rights Movement You are ready to throw it all away if it’s not exactly what you want? Karen Lynch how much work have you put into this legislation? Do you realize how many years it took for everyone to get to this point

followed by the whiney:

Marge Wiederholt If it wasn’t for us birthmothers you wouldn’t be alive! And we are fighting hard for Missouri adoptees sorry you guys hate us so much

Michele A Newell THEY GAVE US LIFE ! THICK HEAD , NOW THEY ARE FIGHING FOR OUR LIVES !!!!

followed by the pathological:

Michele A Newell  YOU GOT THAT RIGHT !
I am not sure where this screenshot was posted originally,  but it was was written by Deb Guinn Donatti, the adoptive mother MARM leader, calling Bastard Nation “assholes” and diagnosing us as parent haters with RAD for refusing to support the continued abrogation of adoptee civil rights by her gang of adoptee savior colonizers.  We are apparently so wound up with our own “traumas” to realize that adoptee rights is really about them. Shut up and be grateful! 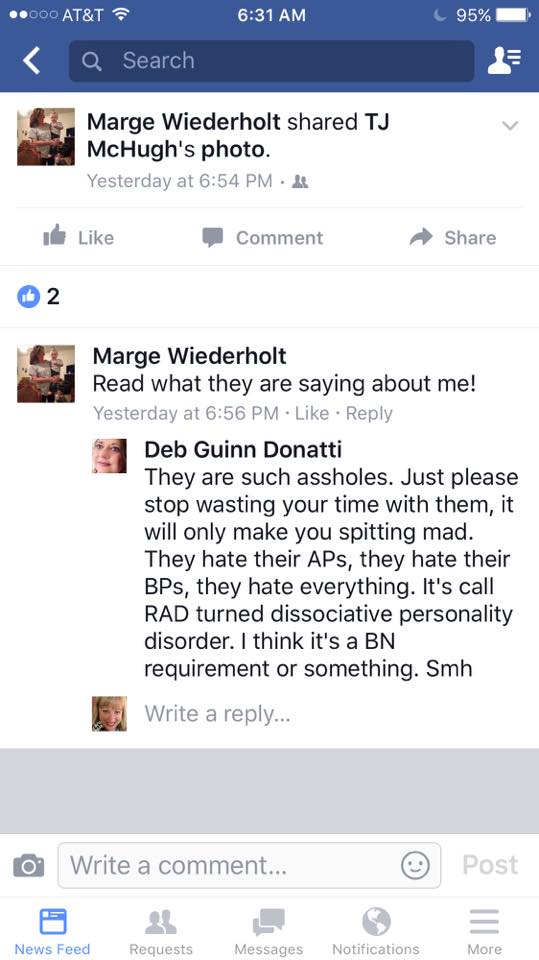 Your silence will not protect you

Not-adopted MARM boss Heather Dodd  seemed either unaware of or tightfisted about the amendments.   The Missouri Legislative website  is indeed slow, but  whatever was going on Dodd wasn’t and isn’t talking. At  5:04 PM  CalOpen director Jean Ulrich  obtained a preliminary copy of most of the amendments, known as LR # 4581S.04C,  and posted a link from her own website to the MARM FB page.  (Reportedly at least one more agency amendment  will follow.)  At 5:54 PM, Bastard Nation LegCom adviser Shea Grimm reposted the link on the MARM page. Neither received a cogent response from MARM  leadership. We can only wonder how Ms  Ulrich was able to obtain a copy of the amendments and speak knowledgeably of them all the way from California when MARM back home in Missouri couldn’t.

We know from previous  MARM statements that it  does not consider  OBC  redactions a genuine breach of our rights–as long as “most people” get their OBC.  As of this writing, MARM has still made no substantive statement on neither  the amendments which seriously ramp up the number of potential redactees or the status of HB 1599  other than claim a victory, which doesn’t even meet the standards of Pyrrhic.

On April  16 at 3:34 PM, Jean Ulrich posted the following request on MARM’s Facebook page. Nearly 43 hours later, as of this writing, there has been no response:

Will anyone in MARM speak to the bill and the latest Senate Committee Substitute, LR 4581S.04C?? For those that attended the April 5th hearing, can you please identify what the adoption agencies wanted, but were not provided in the substitute? I ask, because I am pretty certain that is the amendment that will show up on the floor during Perfection. I want to talk about the bill please, on the sponsoring organizations facebook page.

Ironically, rank and file MARMers as well as adoptee rights organizations in the US unaffiliated with BN  or MO have contacted  both organizations asking what is going on. We don’t have all the answers, but we seem to have more than MARM is willing or able spill, and we willingly share what we do know–with documentation.

I don’t think it is too much to expect MARM to explain to its members,  friends and activists throughout the country what is happening with their own bill.  Does MARM, in fact, even know or are leaders, as usual, too afraid to talk to their own legislators for fear of “confusing” them?