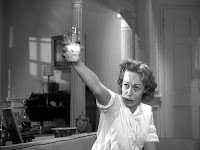 I don’t remember the first time I saw the film The Bad Seed. Based on the 1954 William March bestseller and adapted for the stage by Maxwell Anderson, The Bad Seed had a profound effect on me as a child. By the age of 8, although I hadn’t articulated, it, I’d already determined that children are inherently evil, parents inherently stupid, and suburbia inherently fake. The film validated my deepest thoughts. Making it personal, Patty McCormick, who plays little killer Rhoda Penmark to near perfection, had been a favorite of mine in an edgy sort of way, when she played Ingeborg on the TV show I Remember Mama. I experienced a peculiar “ownership” of her when my doppelganger brat made it big in The Bad Seed on Broadway and then Hollywood. Oddly, Ingeborg and Rhoda were interchangeable with their long hard starched braids. Except for Ingeborg’s 1917 wardrobe, they were identical.

Fast forward 30 years. I’m working at the Ohio State University Department of Theatre. Our alumni includes Eileen Heckart, the actress who created the role on Broadway and carried it to film, of Mrs. Daigle, the mother of hapless Claude Daigle, shoved in the lake and drowned by Rhoda after he beats our perfect little girl out of a school penmanship medal.

Heckie, as everyone called her, would make occasional visits back to Columbus and drop by the department. Every so often we’d receive a shipment of her “memoirs” via UPS for the Lawrence and Lee Theatre Research Institute . I’m not sure what all was in these cartons (maybe Mrs. Daigle’s papers), but we in the office conjectured that it was scripts, letters, clippings, and other products of furious spring housecleaning. 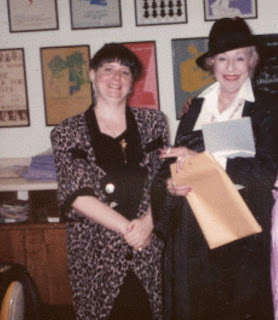 In 1986 Heckie came to the department “officially” in conjunction with the OSU Theatre celebration of the work of Heckie’s friend. OSU alum and playwright Jerome Lawrence and his writing partner Bob Lee (Inherit the Wind, Auntie Mame, The Night Thoreau Spent in Jail)and the dedication of the Lawrence and Lee Theatre Research Institute. The afternoon of the reception for Jerry and Bob, Heckie showed up in all her diva glory. She was funny and dishy, regaling us with tales of Hollywood and especially of her close friend and sometime baby sitter, Marilyn Monroe. I felt that I was in the presence of greatness.

But, that afternoon, for some unaccountable reason, much to my regret, I failed to mention Mrs. Daigle. I suppose I was a bit intimidated or afraid I’d be marked as weird.

Tonight the 80th Academy Awards ceremony will be held. In 1957, Heckie was nominated for Best Supporting Actress for her role of Mrs. Daigle. In some inexplicable breach of common sense and good taste, the Academy brushed aside her performance in favor of Dorothy Malone in Written on the Wind. (Heckie did, however, receive the Golden Globe Award.) In 1973 Heckie finally got her Oscar– for Butterflies are Free.

On Oscar night, I want to remember Eileen Heckart. and her heartbreaking performance of a bereaved mother, obsessed with her son’s missing medal who suspects the worse about Rhoda and is right.

I’m drunk. It’s a pleasure to stay drunk when your little boy’s been killed.

Forget about the wretched Juno. Go out and rent The Bad Seed and get set for Mrs. Daigle.