Below is a letter I sent this afternoon to all members of the Joint Committee on Children and Families regarding SB 959, the adoptee birth certificate access bill. I am deeply concerned at what has happened with this bill. When I testified in favor at the end of the October, I was told repeatedly by committee members and aides that this bill was a shoe-in. The only opposition at the hearing came from the National Council for Adoption, a well-heeled conservative lobby in Washington formed specifically to oppose adoptee access to their own birth certificates.

Sen. Spilka at that time seemed to support SB 959 as written. Now we learn that she has not only held up the final vote on the bill (which we were told would take place within 2 weeks of the October hearing) but proposes to introduce a last-minute amendment tomorrow to make the law prospective only. This would gut the entire intent of the bill: to restore the right of birth certificate access to all Massachusetts adoptees–a right taken away in 1974 by the legislature. I understand that you support SB 959 and urge you to use your influence to keep this horrific discriminatory amendment from passage.

If the amendment is added then the bill should be voted down. Thank you. 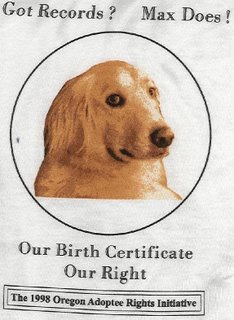 Rights are for all citizens, not favors or privileges doled out on the whim of bureaucrats and special interest groups. But in Massachusetts, adopted adultsc urrently are discriminated against daily by a parallel system of sealed records for adoptees and unsealed records for everyone else. SB 959 as written eliminates the double standard and gives all Massachusetts citizens the right to personal identity and records.

Massachusetts has a long history of redressing social wrongs and promoting justice for all. SB 959 is the latest in this history. SB 959 should be passed out of committee as written.
Amendments to water down access are unacceptable and a slap in the face of every person adopted in the state of Massachusetts whose only “crime” is to have been adopted. No one should beleft behind. If an amendment to bar retrospectively is added to the bill,then SB 959 should be voted down.

Please vote DO PASS on SB 959 as written.Thank you.