In October 2003 Liam Thompson born Dmitry Sergeyvich Islankulov,was torture-murdered by his Forever Parents of six months, Gary and Amy Thompson of Galloway, Ohio. He died on his third birthday. Liam had a slightly older sister, adopted at the same time and from the same agency, Tree of Life in Portland, Oregon. We heard little about his sister then, not even her name, only that she had been placed in care and would probably be adopted by a new family.

Once, a long time ago, Ira was Irina Alexandrovna Pavlova. Then she was Irina Thompson, neglected, but not abused, by Gary and Amy Thompson. Now she is Irina Elizabeth Jean Palmer daughter of Don and Nadine Palmer and sister of Jessica and Cache. She lives in Powell, Ohio, just north of Columbus. Ira likes Taylor Swift and Miley Cyrus, and she’s a gymnast. Pink is her favorite color. She wonders about her family in Russia. She remembers Liam.

One of the key tools in the prosecution of Liam’s death was Amy Thompson’s computer diary where she wrote of her disappointment in the children and how they “sickened” her. They ruined her self-esteem. With their needs and problems, they caused her to doubt her formerly “good” parenting skills. Her 15-year old biological daughter, who knew what her parents had done to Liam, tipped police to the journal. Full contents of the diary have never been published, but police used the document in their investigation. A few excerpts were introduced in court and reported in the Dispatch:*

The Thompsons apparently did not seek much professional help for the children or themselves, but even if they had…

In August, the Dispatch contacted Tree of Life for about the case:

Bianca Marcu, coordinator of international adoptions for Tree of Life, said her agency cannot be blamed for Liam’s death. “Considering the adoption is completed, they are the legal parent,” Marcu said. “I don’t see how the adoption agency should be involved any more. It’s easy to point the blame of the adoption agency.”

In 2000, Tree of Life placed Romanian 5-year old “orphan” Anton Nicolae-Danut, adoptive name Daniel Peckenpaugh, with pedophile William Delos Peckenpaugh, who videotaped his sexual abuse with the boy, and is now in prison. Prosecutors say he” adopted the boy to be a sex toy.” To the best of my knowledge Tree of Life has made no comment on the case, so we can assume Marcu holds not fault there, either.

Tree of Life is Hague accredited through COA. 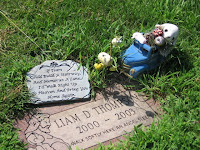 Before the Thompsons killed Liam, Gary Thompson worked for a credit union; Amy Thompson was an LPN. Gary pled guilty to one count of murder a month after Liam’s death and was sentenced to 15 years to life. His first parole hearing will be in August 2018. Amy Thompson pled guilty to involuntary manslaughter. The judge recommended no early release. She will remain in prison until October 9, 2017. Amy’s teenage daughter from her first marriage was placed in foster care; the Thompsons’son, close to the ages of Irina and Liam, last we heard, was living with relatives.

Irina seems to be doing well, and we are happy about that, but Nadine Palmer makes a troubling statement at the end of the article:

“When their names come up (the Thompsons) they try to focus on the good. “We always say that if Amy and Gary hadn’t gone to Russia, we wouldn’t have Irina.”

We don’t know anything about Irina except the story in the Dispatch. But… I hear a lot of this kind of talk coming from people trying to make sense out of disorder and tragedy, especially when they aren’t the direct recipient of that disorder and horror themselves, but witness it in others. I guess it comforts them. We hope, the Palmers, through their positivity, are not forcing Irina to choke down the horror of Liam’s death and of the Forever Thompson Family. To hold back her grief. Saying, virtually, that if it weren’t for Liam’s death, they wouldn’t “have” Irina now, is not acceptable.

*I have hard copies of all articles from the Dispatch, but the originals have been moved to the paper’s paid archives, so I’m linking them to Pound Pup’s archives.