This is the first part of a 2-part blog, which was becoming too long for comfortable consumption. Part 1 is limited to the latest story coming out of Haiti on the break-up of Silsby’s onsite New Lifers and allegations of attempted court bribery last week.

MSNBC reporter Kerry Sanders reported Saturday that one of Laura Silsby’s “missionaries” slipped a note to his producer Don Wood during an off camera interview. Signed by eight of the 10 prisoners, the note said the detainees feared for their lives. And seemingly feared Silsby.

The 3 minute broadcast is below.

Visit msnbc.com for breaking news, world news, and news about the economy 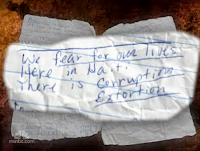 Here are the relevant parts:

******
The Associated Press picks it up from there, reporting Sunday morning (Feb. 7) that Edwin Coq, the Haitian lawyer representing the group in court last week, has been fired by Jorge Puello, the Dominican attorney retained by the detainees’ relatives, after they rejected the lawyer recommended to them by US Consular Services.

Puello in turn, hired Coq to work the Haitian end. Puello, the guy who a few days ago complained to CNN about living conditions in the jail, claims (and what’s left of the Haitian government isn’t denying it so far) that Coq tried to bribe Silsby & Co out of jail and out of the country with $60,000 he’d requested from the families for his fee, even though he told the AP on Friday that he was taking no fee. (No mention on Puello’s fee, if he has one).

In another story from CNN Sunday, Coq claims he was actually hired by Eric Thompson, husband of detainee Carla Thompson, and had quit the case, not been fired as Puello claimed.The London Sunday Telegraph reported that Coq was preparing to resign anyway because he had not received money promised him by the families of this clients.

Puello has a different story. He says:

Coq initially requested a $10,000 fee, but kept asking for bigger and bigger amounts. He said that when Coq reached $60,000, he said he (Coq) could guarantee it would lead to the Americans’ release. Coq orchestrated “some kind of extortion with government officials” that would have led to the release of nine of the 10 missionaries…He had some people inside the court that asked him for money, and he was part of this scheme.”

Despite Coq’s earlier claim of pro bono work, he does not deny he had the money (or at least some of it) , now claiming it was his fee (that didn’t exist on Friday), not a bribe.

I have worked for 10 people for four days working all hours. Look at what hour I’m working now responding to these calls. I have the right to this money.

The story gets more interesting since both Puello and Coq have thrown Silsby under her own bus. At the Friday hearing, pleading for provisional release of all but Silsby (bail where bond is not required, which would permit the prisoners to return to the States until trial), he told the court that in his opinion the nine had been well-intentioned but naive volunteers duped by their leader who had lied to them that she had the legal documents to transport the children to DR. Puello agrees that Silsby lied to everyone else. He seems to have little interest in defending her.

The God that failed. The bribe that failed.
The story is so confusing. Silsby is so slippery. The other defendants so ignorant. To make things more complicated, Coq speaks Creole and no English, and has been working with Silsby through interpreters whose language skills seen to be questionable. Thus, we have a story full of questions, inconsistencies, conjectures, and holes making it difficult to offer sane observations. So far, MSM has not investigated the bribery allegations, instead taking them at face value. I can’t decide without more information, though I can easily see the the morally deficient Silsby trying to buy her way out of her jam–with somebody else’s money

These are some of my random meandering thoughts from the last 24 hours. I keep running them around in my head. They tend to change, so tomorrow I may have a whole set of new observations and conjectures, especially if and when new information is released. 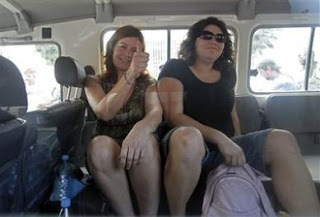 I am particularly struck by Silsby’s performance (and this is indeed performance) before Friday’s court appearance. News videos, some of which can be seen in the above video, show a blissed out Laura Silsby leaving for court, patronizing smile on her made-up face, explaining patiently to her dumbo audience, that God will set them all free. She and her crew, in fact, took their packed bags with them to court, expecting to fly out of Port au Prince later in the day. Was her confidence based on her incessant phone conversations in her head with God or did she believe throwing around money would make the problem–and them–go away? I’ve been around a lot of evangelicals and fundamentalists over the years, but I can’t remember anyone this jazzed on her personal interpretation of God’ will. The woman just isn’t plugged in.

Instead of the walls of Jericho falling at God’s proxy commando, the ten prisoners were officially charged with child abduction and criminal association and remanded to new jails: the men to the severely damaged national penitentiary (all the prisoners escaped after the earthquake); the women to a women’s prison in Petionville. Since Haitian law is based on the Napoleonic Code, anyone charged is considered guilty until proven innocent. The court has up to three months to decide the next move.

Incredibly, after the bad news that they might sit in jail for another three months, Silsby, enjoying her 15 minutes of fame overtime, gave a thumbs up to the press, (see above with her nanny Carissa Coulter) telling the press, “I feel good. I’m trusting God.” Two days later her “missionaries” sent their note: “Laura wants to control. We believe lying. We are afraid.”

10 Replies to “LAURA SILSBY LOSES HER GRIP ON THE GANG; DID THE CON GET CONNED?”