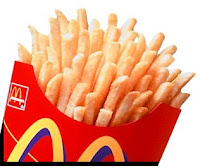 A new McDonald’s “adoption-themed” commercial featuring a conversation between a bag of French fries and chocolate parfait (could I make this up?) has worked up sensitive adopters and agency hacks into a tizzy of hyperbole. How dare McDonald’s “ridicule” the great American pastime of family building for the desperately childless? After viewing the vicious personal attack on his/her family on YouTube, one dismayed child acquisionist froths “The assumption behind the ad is that you can’t be a family if you don’t look alike and that something is wrong with being adopted (as witnessed by the “stunned silence” of the french fries.”)

Stunned silence of the french fries???

Another ventilates: “I hope my two wonderful boys (both adopted) never have to see this commercial on TV. I hope their birth parents never have to see it either. Being adopted isn’t something to be embarrassed about or to make jokes about. It’s about love.”

This must explain why the original birth certificates of adoptees remain sealed in 45 states. Or how 13 Russian “orphans” are now dead at the hands of their new forever families.

These all-about-me sob sisters are the same people who in the last few years have consigned any adopta thing they can’t control: Adopt-a programs (highway, donkey, cow, teacher) Stuart Little, Meet the Robinsons, Who’s Your Daddy, and the Middleton Doll Company to the far corridors of the Adoption Hall of Shame for ” demeaning” adoptees and adoption.

Go here for the commercial and comments. Don’t let it hurt your feelings!

12 Replies to “ITS ALL ABOUT SENSITIVE ADOPTERS: FRENCH FRIES HARM ADOPTEES”