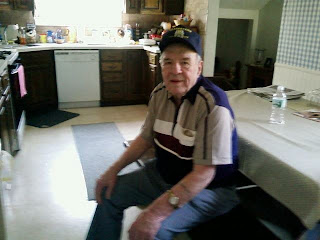 Jack’s name was not on my original birth certificate. My “non-ID” from Toledo Crittenden helpfully informed me that my father was a man. Oh, and that he had blue eyes, was a high school drop-out, working class, and Protestant. (That last part is a stretch. I don’t think he was an atheist, but he had no quarter with organized religion. He refused to be baptized.) He must have been from Akron, since that’s where my mother lived.

I got that information in 1980. Not until 1996, however, did I learn in a letter from my mother, Jack’s initials: JR. As in Ewing. That small slice of information was treasured. It meant, as it can only mean to the adopted, that I wasn’t dropped out of a UFO or born in a cabbage patch. I wasn’t an immaculate conception. I already knew I had a mother, of course, but now I had a father. In Akron. Or someplace. It turned out to be Buffalo. . My mother described Jack as “nice looking.”

The following year, my mother, whose speech was impaired by a severe stroke, told me Jack’s full name. But did I hear her correctly? That same night, my mother’s husband, Bob, clarified what I’d heard and told me my father’s name. I had misunderstood her.

I learned later from Jack that he and Bob had known each other, but not well. Both were truck drivers. Bob knew all about Jack–and me–but Jack had no idea that his old girlfriend had married Bob or that I even existed. Bob wasn’t about to tell him.

One day, according to Jack, my mother just wasn’t around any more. When he rang her up, her father, who never liked him, told him she went out of town to “care for a sick aunt.” Really! And he believed it. He was 17. She was nearly 24! Shortly after her disappearance Jack turned 18, joined the Army, and went to post-war China with General George Marshall for a couple years while the general, under what was called The Marshall Mission, tried to broker a coalition government between the Chinese Nationalists and the Communists. It didn’t work. As far as I can tell, Jack was officially part of Marshall’s staff, but he seemed to spend most of his time carousing and babysitting disgraced Army officers who had been shipped off to China after the war to dry-out or de-tox. It was sort of like MASH without the gore and war.
On Fathers Day 2005 I wrote My Two Dads. Here’s some of the things I said about Jack then:

Jack’s family line was poor by the time he was born. He never went beyond the 8th grade. He worked from the time he was 12 or 13 . His first job was unloading slots for a local gambler. He moved up to driving truck, which he did his entire working life with literally millions of safe driving miles….

...Jack taught himself several languages, including fluent Chinese (Mandarin? I don’t know). I once saw him hustle a 30 something Chinese woman at the Buffalo airport…Jack is a big shot in the Masons, the American Legion, the VFW, and the now defunct Veterans of China-Burma…Jack is a voracious reader. He knows everything except how to keep a checkbook. He once called me up to talk about robber barons.

…Jack was and is a New Deal Democrat. His father often warned him never bring home a Republican to darken the family door. His hero is FDR. Jack’s wife was a bigwig in the local Democratic Party and once took him to Washington to meet LBJ. Jack loathes the Bushes. He always votes a straight ticket. In China he met Mao, and had High Tea with Madame Chaing kai-chek. He says that if he’d been Chinese in 1948 he’d have been a “goddamned Communist.”

Jack had lots of stories. In Nanjing, his main base of operation, he said he ran the harbor for awhile and pulled bodies out of the river. Once an old White Russian general chased him around a bakery with an ax, suspecting him of a dalliance with his young wife. Jack soundly denied this activity to the old general– and me- saying one of his drunked up officers had done the deed. Sent to Shanghai for awhile, he helped another soldier bury stolen gold bars under the floorboards of a room at the Hotel New York. Jack didn’t ask and didn’t want to know where they came from. No matter what Jack said to the contrary, I have always believed that I have one or more Chinese siblings. “I’d know if I had a kid,” he’d tell me. I had to remind him that he didn’t know about me until 2000. “That’s different.” Jack promised to take me to the place of my conception, a “motor court” still in operation on the old Akron-Massillon Road. I was in Ohio and he in New York, so it never happened.

Jack knew Jimmy Hoffa and years after Hoffa’s disappearance and “death,” he claimed he ran into the most famous missing person in America in a hotel lobby in Honolulu. In his later years after his wife died, Jack considered himself kind of a chick magnet. 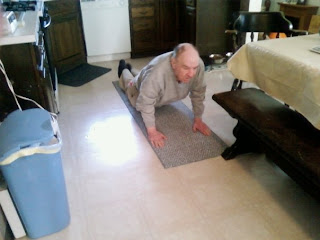 A friend, upon hearing some of Jack’s stories said he sounded like Hunter S. Thompson. Oddly, as he grew older, Jack closely resembled Dr. Thompson.

I think Jack was a great man, but a difficult man. He was one of the smartest men I’ve ever known. He was a man’s man, and I suspect a pretty tough act for my brothers to follow. Strangely, I felt from the beginning that I’d fallen right in line behind him. He had, shall I say, disdain for certain wielders of authority, though he could be quite the authoritarian himself sometimes. He took delight in being one of a two-member team who brought a bastard into the world. At a Friday night bingo game at the Amherst VFW Jack introduced me around to his fellow codgers (he was considered a youngster) as his “late in life child.” One of the old timers shook my hand and chuckled, “We’ve been getting quite a few of them lately.”

Adoptees have (at a minimum) two families. We have two sets of parents: our natural parents from whom we are separated and (single parent adoption aside), our adoptive parents, who by statue, become our new parents. I’ve never really differentiated the two sets except when I need to clarify who I’m talking about. Both are my parents. I have two mothers. I have two fathers. Now all of them are gone, a hard fact that makes adoption even more stressed, absurd, and dysfunctional than it is already. I was very fortunate to have 10-years with Jack, even if I wasn’t the best of daughters at times. I cannot imagine what it is like to find a grave (or two) at the end of your search. I cannot imagine that we are not supposed to know where we came from, and it is painful to know that once, by law, I knew nothing. I have never forgotten the vacuum I lived in for the first 35 years of my life, not knowing a name or place or single fact about my history–not allowed to know because for some twisted reason the state didn’t want me to know. Jack filled in much of that vacuum. He gave me context. I thought he’d outlive us all.
Jack is survived by his sister Patty Simmons, and his brother, the legendary Cleveland disk jockey Carl Reese. He is also survived by his sons Sam Reese, John Reese, granddaughters Crystal Reese and Jasmine Reese, grandsons Markus Reese, Jack Reese, Aaron Reese, Abe Reese, and Jahmal Reese, great grandchildren, and other extended family members. His wife Margie passed away in 1998. In 2008, my brothers Mark and Rob died within months of each other. All of Jack’s sons and some of his grandsons carry his middle name, Jennings. Jack explained once that Jennings was not a family name, but that he’d been named for William Jennings Bryan. 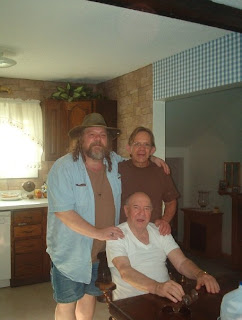 Mark, Rob, Jack
When I first learned about Jack, before I knew him, I’d call him Black Jack, a sort of adventurer on horseback. I don’t know why. After I got to know him, I continued to think of him that way, though I don’t remember ever telling him his secret name. After all, he didn’t have a horse. Now, I salute you Black Jack Reese. You were a hellluva a man and I’m proud to be your daughter.
NOTE: Much to my distress I have misplaced all of my pictures of Jack. I’ve nicked these three pictures from the Facebook pages of Crystal Reese and Marlene Smukall Masullo.

27 Replies to “In Memory of Jack Jennings Reese, My Father”