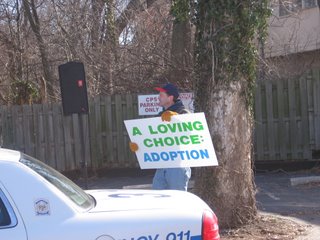 Yesterday it was confirmed that Leslee Unruh (go here for my recent Unruh blog) once charged with wrangling baybees from teenagers and copping a nolo for unlicensed adoption and fosercare practices, wrote the first draft of HB 1215, now Referred Meaasure 6. The measure, if passed tomorrow, will ban all abortions in the South Dakota and pave the way for, in anti-sex Unruh’s wet dreams, the overturn of Roe.

You can read about it at The Well-Timed Period’s Leslee Unruh Admits She Drafted South Dakota’s Abortion Ban Law . Though the revelation is hardly a surpirse, it’s another indication of how much cranksterism has been legitimized in the US.

Leslee Unruh, a person with no legislative or medical qualifications, drafts a law governing the medical care of female patients in South Dakota. She is also the the chief of the pro-ban campaign.

Alan Unruh, Leslee Unruh’s husband, a chiropractor, sits on the South Dakota Task Force to Study Abortions, and is tasked with studying and evaluating medical evidence, reporting the findings, and making recommendations on the need for any additional legislation governing ob/gyn medical procedures. Of note (emphasis mine):

Though it was designated a bipartisan committee, the task force ended up with a voting bloc of nine staunchly antiabortion members–a mix of antiabortion legislators, doctors, a Catholic antiabortion lobbyist and Dr. Alan Unruh, a chiropractor whose wife, Leslee Unruh, is the founder of Abstinence Clearinghouse. From the first meeting onward, the antiabortion majority refused to conduct the investigation with stringent scientific guidelines, as is standard in most research committees. Alan Unruh even protested that such restrictions would exclude research based on ideology.

Addenda: Today’s Citizen Link.com, the online newsletter published daily by James Dobson’s Focus on the Family includes a fairly long interview with Unruh, For Such a Time as This, in which she portrays herself as nothing special, just a humble woman obedient to God.