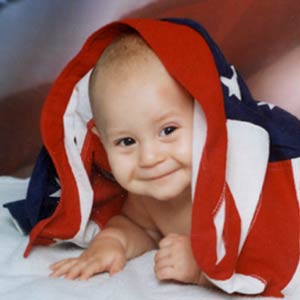 November is National Adoption Month, so we’ll be getting lots of soppy stories about natural mother courage, adoptee gratefulness, and adopter generosity. If I were you (and I’m not) I’d keep a barf receptacle close by, rev up my keyboard, and send off letters to the local editor whenever MSM lunges one of these cowpies across your doorstep or screen.

Our official first lunger, of course, is former pap George W. Bush. His annual National Adoption Month Proclamation hit the streets on November 1 setting the tone for the remainder of the month: 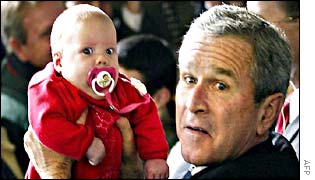 During National Adoption Month, we pay tribute to the parents who
have opened their hearts and homes and helped provide love and
stability for young people. By caring for the youngest members of our
society, these families are helping our children grow into successful
adults and building the future of our country.

Note the disappearance of producers (natural, birth, first, original biological parents) and products (hapless schmuck bastards) and the emphasis on consumers (white picket fencers with disposable incomes, unless they’re queer, but we won’t go there today) whom he praises for “helping our childen grow into successful adults.” Unless, that is. “our children” grow up to be angry, sullen adoptees with axes who want their identities back. Then they are disturbed, spoiled, dangerous–or Democrats.

We shouldn’t be surprised, though. Bush’s entire run has been built around spree shopping. Remember what he said a month after the terrorist attacks on New York and Washington: “We cannot let the terrorists achieve the objective of frightening our nation to the point, where we don’t conduct business or people don’t shop.”

So think of it this way:

Every time a baybee is adopted a terrorist dies.

If anything is worse than Bush’s proclamation, though, it must be
Adoption Becoming More Open for Moms published in the October 30, 2006 issue of the Utah State University Statesman. Even noting that this comes out of Utah: Adoption Mill USA–the article is so far over the mountain that the bear can’t come back. It reads like a truncated email LDS press release. Maybe it is.

In this article we learn that:

*mothers are involved in adoption

*all LDS clients are infertile (isn’t that a bit personal to be broadcast about town?)

This convoluted sentence tops them all, though. I think I know what it’s suppose to mean, and if I’m correct its even dumber than the sentence construction itself:

“I have never had a person regret placing her child up for adoption,
she has felt guilt.” Said Hill, “But they can work through that and for
support there is a group that meets on Wednesday 4:00-5:30 pm it is for
the future birth mothers.

Below is the whole sorry thing. Enjoy!

Oh, by the way…this year’s National Adoption Month theme is “adopt a teen.”

November is National Adoption Awareness month and the process of
adoption has evolved across the years.

With mothers becoming more involved in the process of adoption they
are able to choose a family and can even communicate with their
offspring.

LDS Family Services is a local organization that helps in the
placement of children in two parent homes.

The agency is the largest non-profit organization for adoption and
reduces the cost of adoption for all involved.

All candidates are infertile and often await the child for months or
even years. One reason many people are going abroad for adoption is
that the demand for children exceeds the number of children waiting for
an adoption.

“The adoptive families are better prepared for parental care. The
struggle for fertility, and wait for the child allow for the couple to
develop and grow preparing them for parenthood,” stated Rick Hill the
Director of the National Adoption Agency.

As adoptions become more open the birth mother is able to choose the
home that the child will be placed in. The parents hoping to adopt the
child are all posted on a website called www.itsaboutlove.com.

“When a she finds out she’s pregnant. She is bombarded by advise from
friends, family, even acquaintances. We make sure she gets good
information, and has someone to listen to her,” said Hill.

If she chooses to place the child for adoption, she can then select
the family in which to place her child.

After having made her choice she and the parents can decide how open
the adoption should be. Communication options may be with letters,
pictures, phone calls, or even annual or quarterly meetings.

“I have never had a person regret placing her child up for adoption,
she has felt guilt.” Said Hill, “But they can work through that and for
support there is a group that meets on Wednesday 4:00-5:30 pm it is for
the future birth mothers.”

The meetings are at LDS Family Service and at the same time and place
there is a partner meeting for the future biological grandparents.

Adoption touches more than just the birth mothers and families future
siblings can see adoption from a similar perspective.

“My mom thought she would not be able to have children so she adopted
my older sister,” said freshman Abbey Avery. “I did not even find out
she was adopted until I was 12 years old, but she has always been one
of the family.

Unlike most recent adoptions Abbey’s sister was a closed adoption
though it was brought about by the same agency LDS Family services.

“She met her biological mother when she turned 21 and even was
introduced to her two half-brothers,” Avery said. “When her biological
mother introduced her to her as her daughter she was certain to clarify
who she considered her real mother.

Jane McBride, a junior, was adopted as an infant and is grateful to
have had a closed adoption. “I would have had a harder time defining
who I was with this other mother figure communicating with me.

“Open adoption is not for the child it is for the mother, she is not
willing to completely give up her child.” said McBride.

Hill disagrees, “All the evidence we have found shows that children
from open adoption can feel even more loved. They are given a real
understanding of that love of both their birth mother and parents.

On November 4th at the Aztec Building will be hosting a Carnival
sponsored by Families Supporting Adoption. The carnival itself will
begin at 1 pm until 3 pm, prior to that a leadership meeting and light
lunch beginning at 9:30 am.

20 Replies to “HAPPY NATIONAL ADOPTION MONTH: EVERY TIME A BAYBEE IS ADOPTED A TERRORIST DIES!”