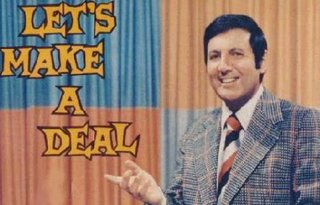 I haven’t seen any official statement yet from Alberto Let’s-Make-a-Deal Torrico, NCFA, the National Alliance or any other baby dump hucksters on the flop of AB 1873 which would have let California parents scram their babies anonymously up to 30-days old. If anything pops up I’ll post it here.

In the meantime, for your amusement I’ve added some new quotes to “Stupid Things Californians Say About Safe Havens” in the August archives. Apparently Assb. Torrico, from the sound of his quotes, believes that there are only 3 things to do with a baby: keep it, dump it or kill it. Door #1? Door #2? Door #3?

Here is Gov. Arnold Schwarzenegger’s statement on his veto of AB 1873.

To the Members of the California State Assembly:

I am returning Assembly Bill 1873 without my signature.

California’s Safe Surrender Law provides an emergency alternative for a woman in crisis who, statistics show, may otherwise abandon, abuse, or kill her baby. The current 72-hour period contained in California statutes allows for a “no questions asked” safe surrender of a newborn and is supported by research and statistics that indicate that most neonaticide occurs within the first day. Some experts have raised concerns about this bill, which I share, that instead of improving child safety, increasing the time that a baby may be surrendered from 72-hours to 30-days, will have the opposite effect, putting newborns in greater risk by keeping them in an unsafe environment without proper care and supervision.

For these reasons, I am returning this bill without my signature.